A HUGE NUMBER of Irish fishing vessels are in breach of a scheme set up to protect foreign staff working on their ships.

In 2015, an investigation by the Guardian found that workers from Africa and Asia were routinely being employed illegally on Irish fishing trawlers and were being exploited as a source of cheap labour.

It found that the issues were mainly concentrated on vessels more than 15m in length that were catching whitefish.

Following the newspaper report, the Workplace Relations Commission (WRC) set up a system to provide permits to fishing workers from outside the European Economic Area (EEA).

The aim was to provide workers with clear contracts backed by minimum pay levels and other mandatory terms and conditions.

However, new figures from the WRC show that a massive chunk of Irish fishing vessels are in breach of the new system.

There are 2,000 vessels in the Irish sea-fishing fleet. Of those, there are 176 registered whitefish and shellfish vessels over 15m in length.

Almost 200 contraventions of the new permit scheme were detected across 110 vessels, meaning that about three-quarters of those inspected were in breach of the scheme.

Of the violations identified by the WRC, about a third related to a failure to produce or to keep records.

A fifth of the breaches related to leave, public holiday and Sunday entitlements. There were 28 cases where inspectors found illegal non-EEA workers on board who did not have valid permission to work. 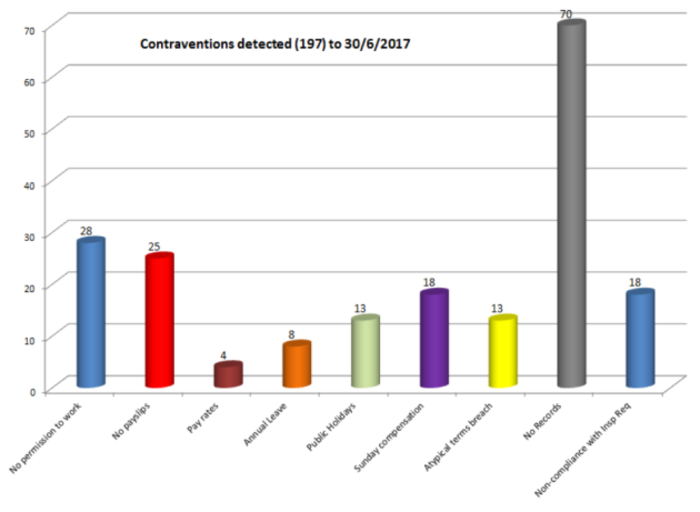 There were violations in several other areas, such as not providing payslips.

The WRC said that it looks for the issues to be rectified and any unpaid wages to be paid. It said that vessel owners that fail to engage with it will be prosecuted.

It said that, so far, it has initiated five prosecutions “where compliance by other means was not secured”.

“But if they don’t, the WRC will move to deal with contraventions through compliance and fixed payment notices or prosecutions,” she said.

As previously examined by Fora, the new permit scheme has been criticised by union officials who helped uncover the original abuse in the fishing sector, who claim that many illegal workers on Irish fishing vessels are still undetected.