IRELAND’S GDP GREW by a massive 26% in 2015, it was announced yesterday. That beat the second-best growth in the eurozone, from little Luxembourg, by an absurd 21 percentage points.

The figure was also massively up on Central Statistics Office (CSO) forecasts of around 7.8%.

However the final 2015 figures have already been widely dismissed as a meaningful gauge of Ireland’s economic strength as they are skewed due to a series of once-only accounting occurrences.

As previously highlighted by Fora, it is likely that many multinational companies are moving their intellectual properties to Ireland, resulting in a huge spike in Irish earnings.

Added to this, tax “inversions” are also a likely contributor. This is where businesses move their official headquarters to Ireland but keep the bulk of their actual operations abroad. However under these arrangements they would still be classified as an ‘Irish’ company in the figures. 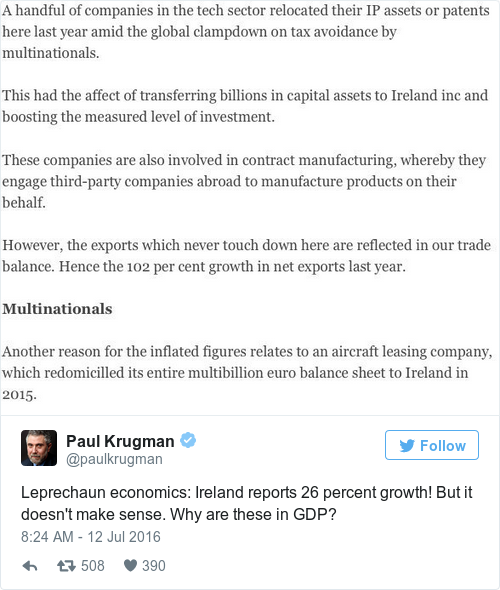 Leprechaun economics: Ireland reports 26 percent growth! But it doesn't make sense. Why are these in GDP? pic.twitter.com/h6M0LhQkSd

Vincent Boland in the Financial Times said the figures were a “work of Irish fiction” and would “reinforce Irish cynicism about its much-touted recovery”.

Jack Allen from Capital Economics consultancy told AFP that despite the “distortions”, the economy had improved.

“Looking through the massive distortions in the Irish GDP data, today’s Q1 release suggests that the economy has continued to perform well”.

Sinn Féin’s David Cullinane added that the figures showed there was “no consistency, coherency or credibility to the national account figures that are supposed to serve as the bedrock for future fiscal planning and expenditure”.

David McNamara from Davy Research said in a note that the problem lies with the standard for accounting national finances. He said the measures are not suitable for a small, open economy like Ireland.

“Clearly, the standard European national accounting methodology is not fit for purpose as an indicator of economic growth in an economy like Ireland at present.”

The Wall Street Journal said the figures “shouldn’t be taken at face value”.

Economist Jim Power told the Financial Review “we would be laughing if these numbers came out of China”.

Meanwhile, Bloomberg’s Leonid Bershidsky said the figures were “a cautionary tale for economists who like to discuss economic growth as a measure of policy makers’ success”.