OVER 20 CAFÉS in Dublin city centre are giving out free coffee this morning in protest against the spread of Starbucks outlets across the capital.

The initiative was organised by Ciaran Hogan, who set up the Clockwork Door on Wellington Quay last October.

He said initially only his café was due to give away coffee to promote the business following news another Starbucks was expected to open nearby. There are currently just over 50 of the US chain’s outlets in Dublin.

However the coffee giveaway grew after Hogan spoke to other business owners about the issue.

He said the model of allowing multiple cafés from the same chain to open across Dublin is “drowning out the small independent businesses that are trying to give the city its wonderful character and vibrancy”.

“I see that everything is becoming monotone, by procedure; there’s no colour and flavour and there’s nothing unique about Dublin.”

Hogan said he’s yet to raise his concerns with Dublin City Council, however he was partly inspired by the recent success of the campaign to save trees in Fairview. That public push succeeded after locals put pressure on the council.

“We are doing this action to show (people) that small independent places are alive, we are around, we need your support – because it’s going to have to be a customer-driven thing,” Hogan said. 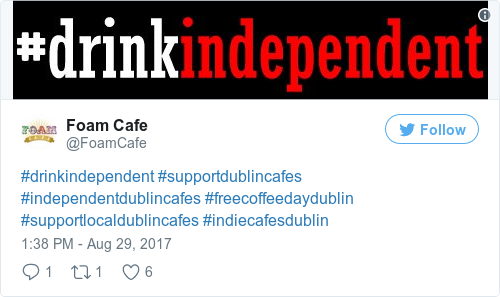 He said that the “enthusiasm and eagerness” of other businesses to join the campaign had surprised him.

“We are all a community of people who have put in our life savings or all our hard work, or years of our time to just get by,” he said.

Hogan said that there is a point on O’Connell Bridge “where you have line of sight to five Starbucks locations”.

“It’s getting to the point where it’s ridiculous. I can’t blame Starbucks, they are a company, they make money, that’s their model,” he said, however he added there should be restrictions on the number of outlets from a single chain allowed in the capital.

“Dublin people I think realise that there is definitely a need and a reason for the small independent places that give the city colour and flavour and its own style.

He said his business has “had no support, no handouts, no government support for small business, for someone who is really trying on their own”. Starbucks has been contacted for comment.

Written by Aoife Barry and posted on TheJournal.ie