IT’S OLDER THAN the Irish state by more than a century, but Waterford-based oats business Flahavan’s is giving more youthful food brands a run for their money.

Its breakfast and snacking products fit in with growing consumer demand for healthier products; it has an ‘authentic’ backstory; and it has moulded a trusted and widely recognised brand.

“People remember their parents going down and making porridge in the morning and setting the fire before the children came out of bed and then went off to school,” John Noonan, sales and marketing director, says.

“We tend to get that when we talk to our older consumers rather than our younger consumers, but it does help to illustrate the position the brand holds in people’s hearts in Ireland,” he adds.

With origins dating back to 1785, Flahavan’s is now a seventh generation family business fronted by managing director John Flahavan, pictured above.

Under his watch the company has grown into a fruitful operation. Newly filed accounts for the year to end of June 2018 show that Edward Flahavan & Sons recorded a profit of €1.2 million on sales of €22.9 million.

Part of the company’s survival, particularly in more recent years, is owed to its research and development of new products.

Though it’s primarily known as the maker of pantry-staple porridge oats, the Flahavan’s portfolio features dozens of items like flapjacks and ready-to-eat cereals.

“We would be very conscious of the need for our products to appeal to younger users as well as older users,” Noonan says.

For example, more than a decade ago, the company noticed an uptick in the consumption of breakfast at the office desk instead of the kitchen table, which sparked the idea for a microwavable Quick Oats product.

More recently, it picked up on a growing appetite – mainly among health conscious millennials – for overnight oats, which are prepared as a grab-and-go option for the morning.

“It was something that was obviously being seen on social media,” says Ellen Flahavan, brand marketing manager and daughter of John Flahavan. As well as monitoring consumer trends, ideas for new products generally start out as recipes in books produced by Flahavan’s.

“When you look at oats, it’s not just used as a porridge,” Ellen Flahavan says.

“You can blend it and use it as a flour and you can make shortbread biscuits and savoury oat crackers. We’ve used it in lasagnas and in smoothies.”

New products are tested using the so-called ‘stage-gate process’, a method of determining whether to proceed with an innovation at the various steps between an idea and a marketable product.

According to Noonan, the company has a good track record on new product introductions.  “We would probably see that 10% to 15% of our products have over periods of time failed (within five years of their launch),” he says.

While Flahavan’s has grown its domestic sales by rolling out new products ranges, it is also aiming to increase its export business, which today accounts for about a quarter of overall turnover.

Currently exporting to 20 foreign markets – predominantly the UK – the company has its sights set on beefing up trade in the US.

As part of the push, Flahavan’s introduced new packaging for its Stateside ranges several weeks ago.

“When we go abroad, we actually brand our products deliberately as Irish porridge oats,” Noonan says.

“We tend to find that the idea around an oatmeal that comes from Ireland has a certain positive associated with it in the sense that consumers in those markets associate Ireland with being a country that provides very good quality ingredients.”

“We plan to grow it further,” he says, noting that the business partnered with gyms in Manhattan and New Jersey to try and flog sachets of porridge.

It’s the kind of activity-based marketing that has worked well on this side of the Atlantic with promotions at events and in partnership with TV presenter Kathryn Thomas’s Pure Results fitness boot camp.

James Flahavan is also keen to increase the brand’s footprint in parts of Asia, such as South Korea.

“A lot of continental Europe wouldn’t be used to eating hot cereal or porridge in the morning time. There’s a bit of an education piece with some of those newer markets,” he says.

“Often, the more established custom of eating hot cereal could be some of the further away markets.” 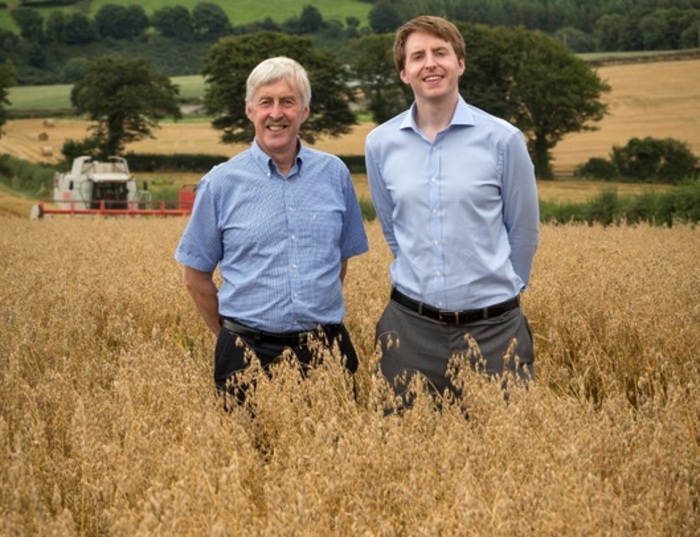 In South Korea, oats are generally viewed as a snacking option rather than a morning meal.

“Consumers there would often eat it with savoury ingredients as well as sweet ingredients. They could put oats with garlic, ginseng and anchovies together and make that into a porridge, which would not be appealing to your typical consumer here,” Flahavan says.

“Those are things that would come into our thinking around new product development and innovation; around different types of consumption, when you eat it, things like that.”

John Noonan says one of the beauties of operating an independent family business is that the company has more luxury when it comes to testing items before launching them.

“There probably is an element of bringing a number of new products to market each year, but one of the advantages of not being a multinational is that we can set our own time frame around them and get the research right before we go to launch,” he says.

Flahavan’s was today awarded the ‘longevity’ gong at the Energia Family Business Awards.

Though the next generation has already joined the business, it begs the question of whether the family will ever relinquish control of the company.

Noonan says: “From the perspective that I have, John has often said to me, the business has been in the family for 230 years and he would be interested in knowing what it would be like in another 230 years down the line.”