THE HEAD OF one of Ireland’s biggest property websites says she’s “alarmed” at the sprawl of Dublin as people continue to snap up homes on the city’s outskirts.

New research from MyHome.ie found that there were about 7,500 house sales in Dublin in the first six months of 2017, up from 6,700 during the same period last year.

The study, based on an analysis of the Property Price Register, found that Dublin 15 was the postal district with the largest number of sales, with 751 – almost twice as high as the postcode with the next highest number of sales, Dublin 18 with 387.
MyHome.ie managing director Angela Keegan said the fact that so many homes were being sold in Dublin 15, which covers areas like Blanchardstown and Mulhuddart, is a concern.

She said it illustrated the sprawl of the city “up to and beyond the M50″.

“There are 14 new developments in Dublin 15 and clearly these are proving attractive to first-time buyers,” Keegan said.

“Builders are now building in staggered phases so the supply is coming through more slowly. The pent-up demand, caused by the lack of supply and shortening sale agreed times ensure any new properties coming on the market are absorbed very quickly.”

She added: “One of the key issues for people buying properties on the outskirts of the city is the commute to work.

“While first-time buyers are increasingly desperate to buy their own homes, commuting times are increasing at an alarming rate as the city spreads beyond the M50 and this will be a huge issue for Dubliners in the years ahead.”

The issue of Dublin’s sprawl has been highlighted by several prominent figures, including the likes of Hugh Wallace, a judge on RTÉ’s ‘Home of the Year’, who says more high-rise buildings are needed. 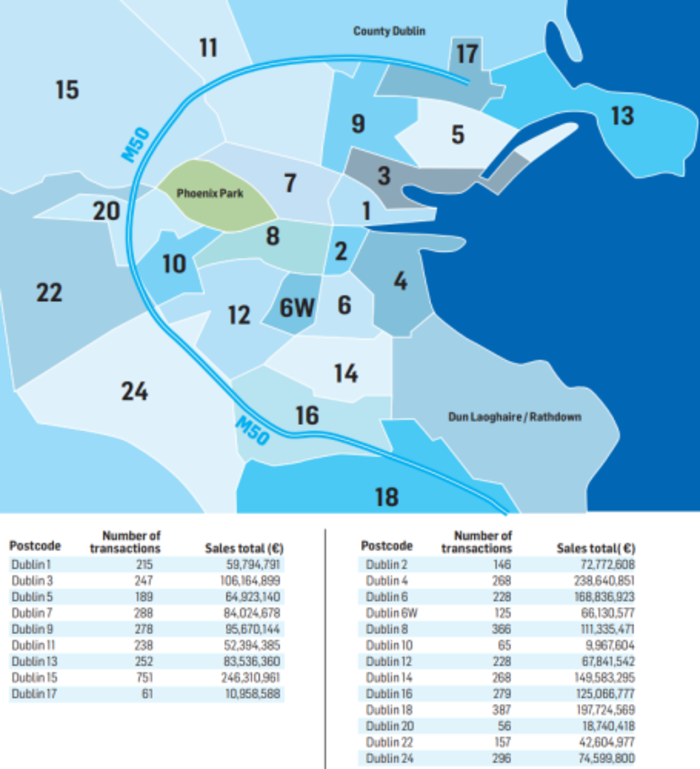