THE AVIATION REGULATOR has set the maximum fees that Dublin Airport can charge airlines over the next five years at a rate lower than operator DAA’s asking price.

Earlier this year, the Commission for Aviation Regulation (CAR) proposed cutting the levy from €9.30 to €7.50 per passenger, which DAA chief executive and seasoned retailer Dalton Philips called “bargain basement territory”.

Following consultation, the CAR has decided to cap the figure at an average of €7.87 a head, a difference of €1.78 compared to Dublin Airport’s proposed average charge. The airport and other stakeholders can appeal the decision.

The commissioner said this is to accommodate a major expansion programme at Dublin Airport where it will add extra aircraft stands, piers and boarding gates to facilitate growing passenger numbers. This is in addition to its multimillion-euro North Runway project.

“We’re going for different prices in five different years because when you take into account (stakeholders’) suggestions, you do need to bring forward some depreciation to ensure that the projects are financeable and that has more of an impact towards the end of the period,” aviation commissioner Cathy Mannion said.

DAA chief executive, Dalton Philips said he was disappointed at the move, adding that it would impact on its future investment and development plans.

“Dublin Airport’s prices are already 30-40% lower than its European peers and the Regulator’s decision will mean Dublin’s prices will now be almost 60% lower than the EU market price,” he said.

“This determination is a disaster for passengers, and for the Irish economy, as we won’t be able to pay for the new and improved facilities that are required for Dublin Airport.”

Philips added: “Contrary to the Regulator’s claim, airlines saving money does not benefit the Irish economy. Any reductions in airport charges have been going to the shareholders of privately-owned airlines, the majority of which are located overseas.”

The CAR warned that if Dublin Airport does not deliver some key projects on time and on budget, it will further reduce airport charges. The regulator is confident this won’t happen and has established a so-called ‘stagegate process’ for the airport to keep it informed of the status of these projects.

The aviation watchdog is also willing to allow Dublin Airport to seek an interim review of maximum charges if there is a “hard Brexit”, Mannion said. 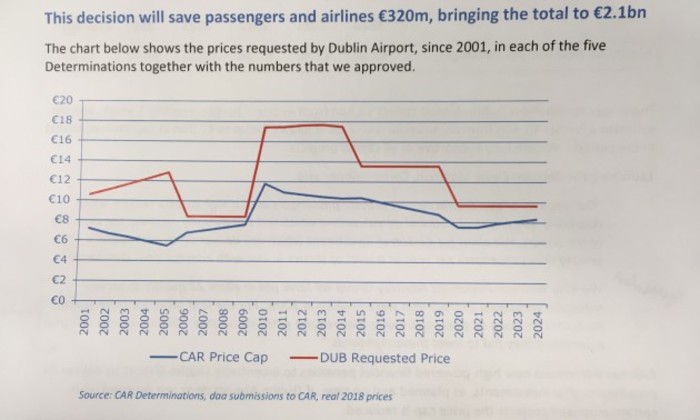 DAA had calculated the cost of its €1.8 billion expansion plan on the basis that it would be able to charge airlines an average €9.65 per passenger between 2020 and 2024. It has previously argued that its prices are already cheaper than comparative airports.

However, the CAR believes the €7.87 average price will generate €1.4 billion for Dublin Airport between 2020 and 2024. This is in addition to a further €1.4 billion the regulator expects the airport to create through commercial revenues.

The regulator’s prices are based on a number of factors where it differs from the views of DAA. For example, the CAR believes Dublin Airport will generate a higher turnover through retail and car parking sales than DAA’s forecast.

“We’re not saying that a staff member should process more passengers per hour; (workers) should be allocated when they’re most needed,” Corcoran said.

In addition to rolling out a new airport charges regime, the CAR has put in place additional metrics to measure to quality of services at Dublin Airport.

The hub is now subject to 22 such measures, compared to the nine introduced in 2009. These include security queue times, the availability of self-service check-in kiosks, and the cleanliness of the two terminals. It must pay a penalty if these standards are not met.

The CAR said this is to ensure the airport adequately accommodates passengers who may require extra assistance.