But earlier this week, at a press gathering to mark the pouring of concrete pavement at the airport’s incoming runway, there was a slight quiver of frustration in the airport exec’s distinctive transatlantic accent.

“It’s a very serious situation,” Philips said, referring to two big challenges that DAA has frequently said threaten to derail its ambitious growth plans and deny the Irish economy billions of euro in years to come.

The first problem relates to planning conditions attached to the North Runway project that would restrict the number of nighttime flights at the airport once the project is completed in 2021.

The second hurdle for DAA is convincing the aviation regulator to ditch a programme to cut airport charges by 22%, which the semi-state company says will make it impossible for it to invest in badly needed infrastructure at the already packed hub.

The winning soundbite at the press update this week was that Dublin Airport is on track to deliver a “world-class runway” – but it will be marred by a “yellow-pack passenger experience” unless DAA gets its way.

“This is absolutely existential,” Philips insisted. But the project still hasn’t cleared for take-off and not every stakeholder is on board. 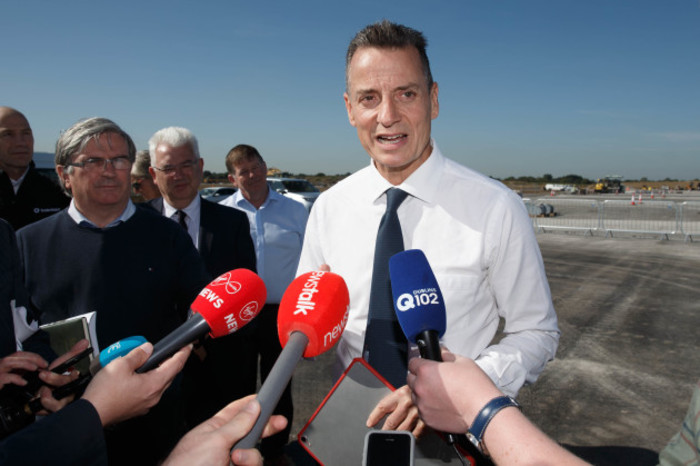 In 2018, it catered for more than 30 million passengers for the first time in its history. That’s roughly seven million more people passing through the hub than a decade ago and the airport has already seen 6% growth so far this year.

As a result, the existing facilities at Dublin – which accounts for 85% of all air traffic to Ireland – are under serious strain and the main runway is essentially full between 7am and 9pm.

For that reason, the North Runway – which is technically Dublin’s third such facility, though the second is only generally used in extreme weather – is required by DAA to fulfil its mandate to expand capacity to match demand.

The project has been in the making for some 50 years and was first given planning approval a decade ago. Permission was later extended in 2017 – after three legal challenges against the project were thrown out – and main construction began in February of this year.

Some 3.1km in length – or the equivalent of six O’Connell Streets in Dublin, according to Dublin Airport managing director Vincent Harrison – the massive €320 million build, a joint venture between Limerick-based Roadbridge and Spanish group FCC Construcción, is on track to be completed in early 2021.

But there’s a fly in DAA’s ointment, which the semi-state company has been rallying against for a while.

When An Bord Pleanála first granted permission for the new runway in 2017, it attached 31 conditions. DAA is looking to overturn two of them: one that prohibits takes-offs and landings at the new runway between 11pm and 7am, and another that says the average number of aircraft movements at the entire airfield must be capped at 65 during these hours once the project is completed.

“Those are hugely onerous conditions for an island nation that depends on being an open economy,” Philips said.

The DAA boss explained that at present there are 120 such aircraft movements at ‘night’, though in reality most occur between 6am and 7am. Philips denied that the airport is looking for free rein to operate in the middle of the night, which is the concern of some nearby residents.

“We don’t want to increase the amount of flights in the middle of the night. Passengers don’t want that, we don’t want that. But we are an hour behind continental Europe. We can’t restrict the number of people who want to get out of Ireland at 6am and move that to 7am, that would have a very dramatic impact,” he said. 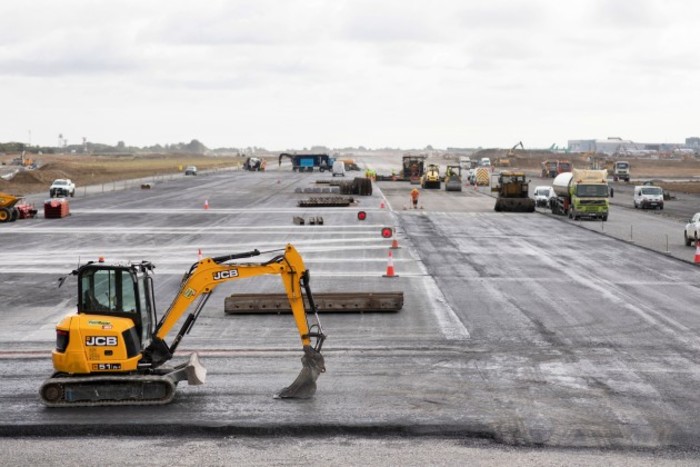 Fingal County Council was controversially chosen as Dublin Airport’s noise regulator and it is through this body that the airport operator will seek to amend the 2017 planning permission.

Philips told Fora he thinks the “world has moved on” since the 2007 restrictions were put in place.

“Aircraft are considerably quieter today than they were back then, and eventually aircraft will become solar and they’ll make no noise. So having conditions which are focused on movements, we don’t think is the right way to look at it,” he said.

Instead, DAA will propose that Fingal’s noise regulator should measure total noise output instead of slapping a restriction on movements.

“We are saying that having an antiquated system which measures you on movements but not noise is the wrong way to go. We have in Dublin Airport some of the quietest fleets in the world because they are obviously so well-invested in by Aer Lingus and Ryanair,” Philips said, referring to the airport’s two biggest customers.

The restrictions on night-time take-offs and landings were intended to reduce noise pollution and protect households that are likely to be affected by extra flights that will come with the North Runway.

Two schemes have been set up to appease locals: one to provide insulation to more than 200 households in the surrounding area, and another where DAA will offer to pay a 30% premium for 38 homes through a voluntary purchase scheme.

But some residents are not happy.

Sheelagh Morris of the St Margaret’s Concerned Residents Group, which represents 22 homes near the airport and campaigned against the third runway in court, says locals feel as though they have “been trampled on” and are “being forced out of our homes”.

When asked to explain what life is currently like on Dublin Airport’s doorstep, Morris said “you certainly don’t get a good night’s sleep”, with flights taking off every few minutes from around 5.30am.

Morris and other members of the St Margaret’s group are sceptical of DAA and the local authority, which is part of the reason why they have so far refused to accept the offer to insulate their homes because of fears that the works will be inadequate.

“Insulation is fine if you’re further away, but it’s not going to work for us, according to our sound engineer,” Morris said.

As for the voluntary purchase scheme, she told Fora that residents have so far refused to sell their homes, as both a matter of principal and because they don’t believe DAA is offering a fair price – something the company rejects.

“We’re not surrendering our homes. (DAA) have to recognise that you can’t replicate what we have,” she said, noting that residents have easy access to both central Dublin and greener townlands.

DAA’s Dalton Philips expressed sympathy with the residents who will be affected by the North Runway.

“I absolutely feel for them … If you’re one of those residents, you feel the impact and that’s why engagement is key,” he said. “We’re trying to do everything we can to support our community.”

But it is Dublin Airport’s argument that the needs of the Irish economy must be balanced with the local community’s.

With relations already fraught, Morris said the the St Margaret’s group intends to pursue DAA through the planning system – and the courts if necessary. 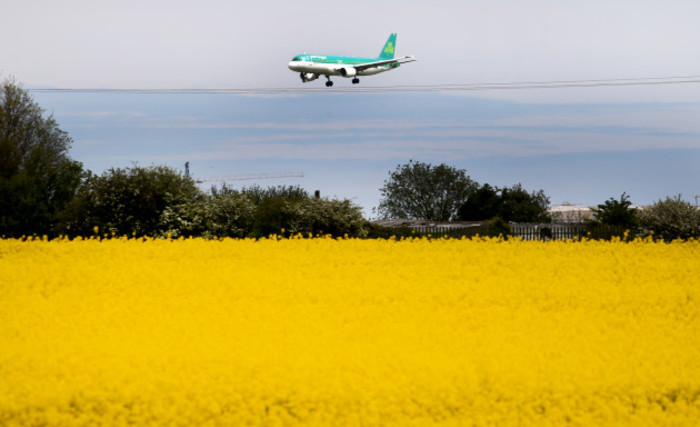 In addition to completing the North Runway, DAA also intends to tackle its constraints issue by investing €1.8 billion in improving facilities so it can cater for up to 40 million passengers a year, some 10 million more than today’s figure.

This investment programme would include new boarding gate areas, aircraft parking stands and other services, as previously reported by Fora. These are facilities that several airlines have said are badly needed if the airport is to grow.

DAA – which doesn’t receive State funding – has calculated the spend based on charging airlines around €9.65 per passenger between 2020 and 2024.

However, the Commission for Aviation Regulation (CAR), which decides how much the airport can charge its users, has proposed cutting these levies to around €7.50 per passenger. It will make a final decision by the end of September or early October.

Dalton Philips – a seasoned retailer who previously fronted UK supermarket Morrisons – said Dublin Airport is 30% to 40% cheaper than comparable airports, making it “the Aldi and Lidl of Europe”. By reducing passenger charges to €7.50, it would become “50% cheaper and you’re into bargain basement territory”.

Earlier this year the European Investment Bank agreed to provide a €350 million loan to DAA to help fund upgrades at the airport.

Philips said that DAA doesn’t wish to borrow money from the private market to fuel the investment over fears that the company could ultimately lose control of the airport:

“We don’t want to securitise the asset to such an extent that if there was a terrible downturn and we couldn’t make our repayments, that a bank takes over a critical piece of infrastructure.”

Despite Philips’s tough stance that the CAR will decide Dublin Airport’s future, some in the industry are sceptical.

One senior aviation executive, who spoke to Fora anonymously, said they believe DAA is “throwing their rattle out of the pram, instead of taking a more measured view”.

“They obviously don’t want the charges to be reduced. The regulator has questioned some of their cost assumptions. The price will probably be somewhere in the middle,” they said.

Given the service constraints that airlines are currently experiencing at the airport, the source said DAA has no choice but to find some way of financing infrastructural changes.

“The (capital investment programme) is serious stuff. This isn’t tipping around the edges … If they don’t do it, Dublin will go backwards.”