SKY HAS STRUCK a last-minute deal to keep Discovery channels on its service in both Ireland and the UK after a public falling out over pricing.

Last week, the pair engaged in a tit-for-tat exchange about the issue. Discovery was looking for more money, claiming Sky paid it less than a decade ago – despite the content provider adding new channels and increasing viewership.

In a statement last night, Sky said it would continue to carry the Discovery and Eurosport channels after reaching an agreement with the US company.

However the two firms appeared to remain at odds over which side caved in the stand-off, with Sky claiming Discovery accepted a proposal from “over a week ago” – while Discovery said the parties had struck a new deal.

Earlier, Susanna Dinnage, managing director of Discovery Networks UK and Ireland, accused Sky of using its “dominant market position to further its own commercial interest over those of viewers and independent broadcasters”.

“The vitality of independent broadcasters like Discovery and plurality in TV is under threat.” 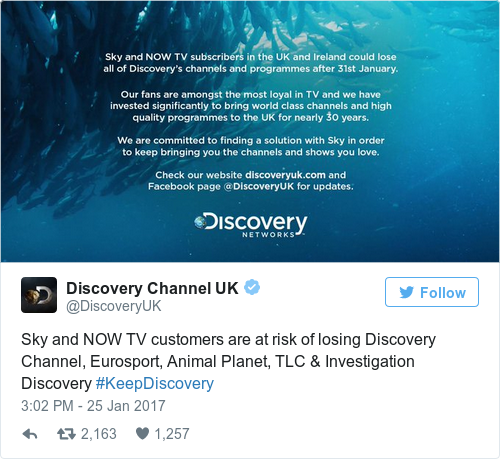 In response, Sky had claimed Discovery’s “price expectations” were “completely unrealistic” and the TV provider wanted to “set the record straight” on the issue.

“We have worked really hard for more than a year to get a deal done for our customers with Discovery, so we are disappointed with their misleading claims and aggressive actions,” it said in a statement at the time.

“We were prepared to pay a fair price for the Discovery and Eurosport channels and invest more in those channels to make them even better for our customers.

“We have offered hundreds of millions of pounds to Discovery, a $12 billion American business, but that wasn’t enough. They asked the Sky Group to pay close to £1 billion for their portfolio of channels, many of which are in decline.

“Sadly, we have now had to prepare for Discovery to take their channels away from Sky customers, as they have threatened to do. It is Discovery’s choice to do this, not ours. We never left the negotiating table and they haven’t come back to it since they made their threats public.”

The US-based Discovery Channel is owned by Discovery Communications, whose largest shareholder is billionaire John Malone.

The communications mogul is also the chairman and dominant shareholder of Liberty Global, which owns Virgin Media Ireland and, in turn, free-to-air station TV3.

Sky’s largest shareholder is Rupert Murdoch’s 21st Century Fox, which in December reached an agreement to buy the remaining 61% of the European TV and cable giant it doesn’t already own.

Sky and Virgin Media dominate the cable TV market in Ireland, with the latter rebranding from UPC Ireland in late 2015.