THERE SHOULD BE a ban on the sale of diesel and petrol cars in Ireland by 2030 as the population moves towards using electric vehicles.

That’s according to a new report from PwC, which also said that diesel and petrol cars should not be allowed to enter cities and towns from “some point beyond 2030″.

The study – titled ‘transitioning to a low-carbon energy system’ – was commissioned by the Electricity Association of Ireland, the representative body for electricity companies operating on the island.

The report looks at ways that Ireland could reduce its carbon emissions in three key sectors: electricity, heat and transport.

Among the policy recommendations it makes is a shift to electric cars.

“Our roadmap envisages the mass adoption of electric vehicles in place of traditional petrol and diesel cars with heavy goods vehicles running on biogas in the form of compressed biomethane,” the report said.

It said that electric vehicles’ “eventual market domination” would require the support of policy over three distinct phases.

The first, from now until 2025, would see a range of measures introduced to encourage a switch to electric cars, such as giving the vehicles free parking in city centres.

This would be ramped up from 2025 to 2030, when ‘emission-free zones’ would be set up in towns and cities, and expanded again after 2030, when the sale of traditional internal combustion engine (ICE) petrol and diesel cars would be banned. 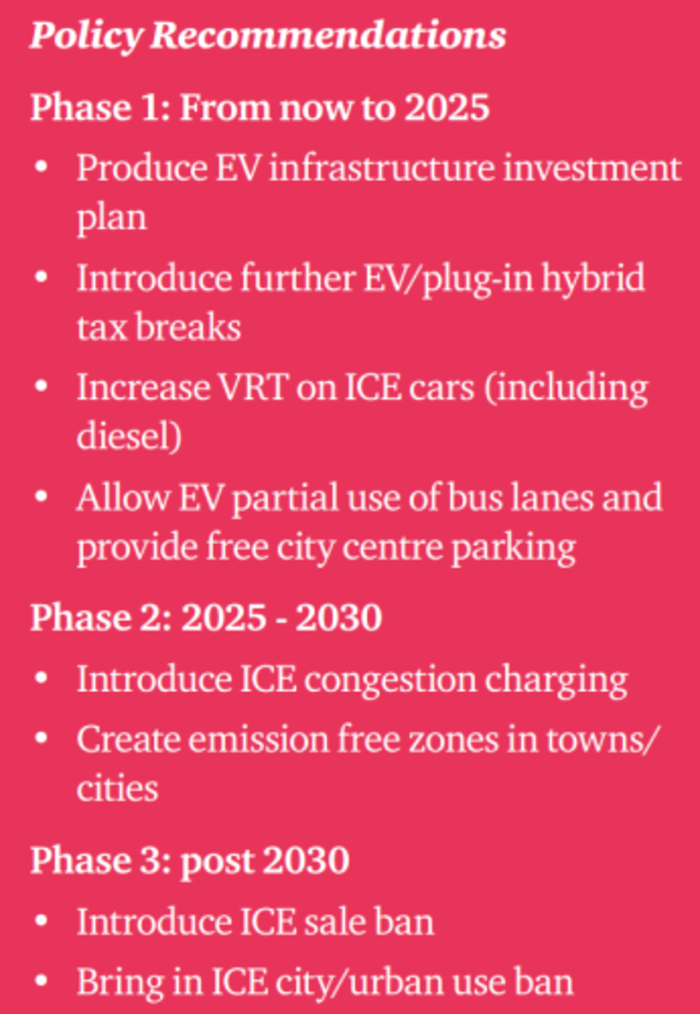 “Policy will, however, be required to encourage mass adoption and assist in delivering the step change in consumer attitudes towards electric vehicles.”

It added: “To achieve the increased level of adoption post 2030 would, we believe, require an outright ban on the sale of internal combustion engine cars from 2030 onwards.”

“Following recent proposals in Athens, Madrid, Mexico City and Paris, Ireland could prohibit diesel and petrol cars from entering cities and towns from some point beyond 2030.”

Other policy changes recommended by the report to lower Ireland’s carbon emissions included:

The report said that, due to the predicted investment in renewable energy sources, the wholesale cost of electricity would likely rise by about 11% over the period 2016-2050.

“This would equate to an increase of €220 per household per annum, significantly lower than the anticipated price increase in a business-as-usual world with a high carbon price where we estimate an increase of approximately €510 per annum,” it said.

The report also said that the measures it is calling for could help Ireland avoid EU fines that it would be liable to pay if its carbon emissions are too high in the future.

Minister of State Sean Kyne said that he welcomed the report from PwC, and said that the government is committed “to achieving a low-carbon economy”.

“This report will provide a useful input to the finalisation of the national greenhouse gas mitigation plans currently being prepared under the Climate Change and Low Carbon Development Act,” he said.

“Increased cross-governmental thinking is already happening and will indeed be required to implement a range of solutions along the way if Ireland is to avoid high costs.”