DUBLIN REMAINS ‘good value’ despite the capital shooting up the league table of the most expensive cities worldwide in which to live and work.

The city has been ranked among the most costly in the world by global property group Savills in its latest live-work index.

The study measures the annual cost of renting and occupying a home per person – ‘living costs’ – alongside the cost of office space per employee – ‘working costs’  - for 20 world cities.

Dublin did not even feature on the list as recently as March 2015, however the city is now placed fourteenth out of the top 20.

The study put the live-work accommodation costs per employee in Dublin at $45,147 at the end of July, a rise of 11% compared to the end of December 2015.

The increase in costs saw the city jump ahead of Moscow, where prices fell by 9%, and Shanghai, where values dropped by 3%.

New York, where live-work accommodation costs were found to be $114,010, topped the table. The US city overtook London, which had spent the past two and a half years at the summit of the index, as costs in the English capital fell by 11%.

However, the British city still came in as the third most expensive overall at a total cost of just over $100,000 per employee, slightly behind Hong Kong which had an average expense of almost $101,000. 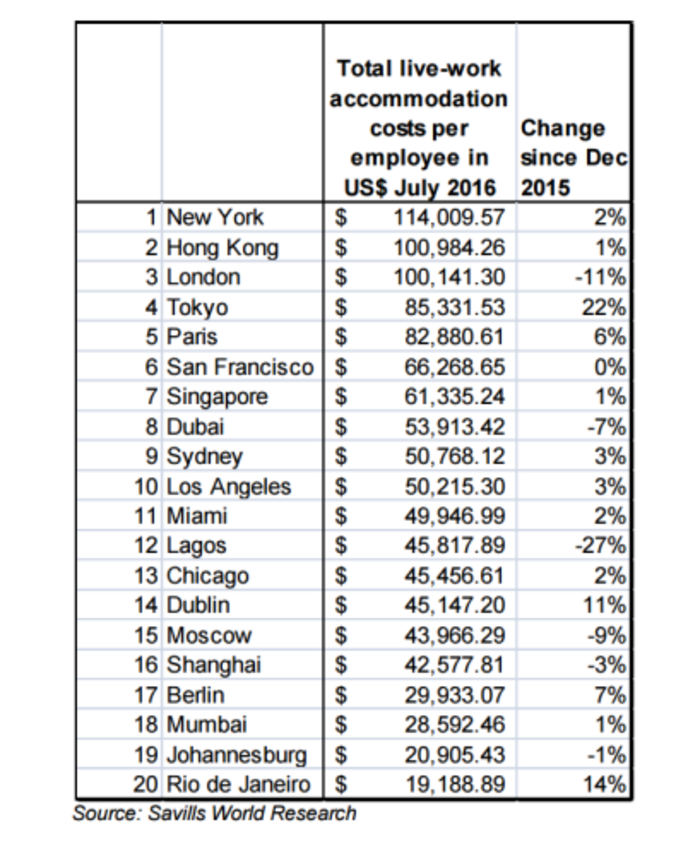 Dublin also came in ahead of Berlin, where costs were found to be $29,933, a 7% increase, making the Irish capital the second most expensive eurozone city on the list.

It follows similar findings from a previous survey from Mercer, which placed Dublin behind only Paris in the eurozone when it came to the living costs for foreign workers.

Savills noted the rise in costs in Dublin and said that it was likely primarily fuelled by “a big bounce in office rents from low post-GFC (global financial crisis) levels, especially in the creative (and) tech sector”.

Despite their rise in costs compared to the end of 2015, Savills said that both Berlin and Dublin “look very good value to businesses looking to locate within a large and prosperous economic region”.

“Annual accommodation costs in these cities are among the lowest in the Savills live-work index and comparable to Mumbai and Lagos.”

The property consultants also said that London’s fall was likely due to the impact of the UK’s recent vote to leave the EU.

“The impact of currency falls post EU referendum has made London very much more competitive on the world stage, reducing occupation costs in dollar terms by 11% since the beginning of 2016,” it said.

It added that, Dublin aside, “the European cities have shown mostly modest rental growth in local currencies but the strengthening of the euro since December has made them slightly more expensive in dollar terms”.