VIRTUALLY NO ONE will be buying digital cameras come the year 2020, according to Ireland’s largest retail industry body.

In its latest quarterly review in conjunction with Grant Thornton, Retail Excellence Ireland (REI) reported a sharp fall in digital camera sales during the first three months of the year.

Irish digital camera sales fell by 24% on a like-for-like basis during the quarter. Although the rate of decline slowed compared to the first quarter of 2015, when sales dropped by a third year on year, REI has nonetheless predicted the near-demise of the sector.

“Digital cameras continue to suffer due to mobile phone photography. Bar the specialist camera market, digital cameras will be completely extinct by 2020,” it said.

It added that the market is slowing more prominently at the budget end of the spectrum, leading to bigger overall declines as sales of the product become increasingly niche.

Contrastingly, strong menswear sales during the first three months of the year were attributed to the star power of MMA athlete Conor McGregor.

Sales of menswear soared by almost 12% during the first quarter of the year compared to the same period during 2015.

REI said that menswear traded particularly strongly during the period, saying that this was “a function of style-conscious male millennials led by their style icon Conor McGregor”.

The retail industry body previously cited McGregor as the possible cause of the increase in like-for-like menswear sales during the third quarter of 2015. Although menswear sales dropped on a relative basis from November to December, they have increased strongly since the start of 2016. 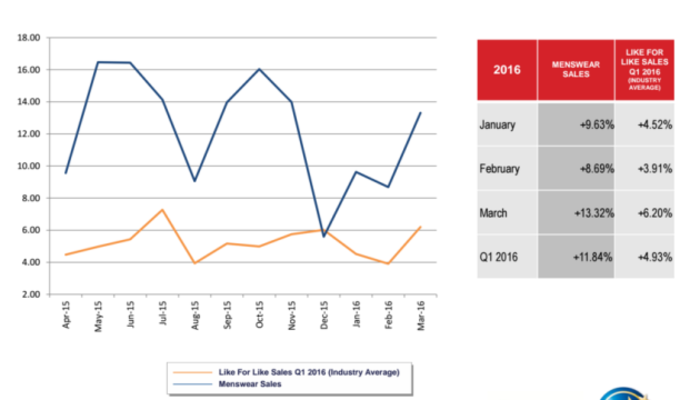 Overall retail sales were up just under 5% year-on-year, which the organisation said was caused by strong grocery growth. Like-for-like sales also rose significantly in the footwear and pharmacy sectors, which grew by just under 6% and 5% respectively.

However, the REI said it was concerned that much of the rise was driven by Easter falling in the month “rather than the fundamentals of a sound recovery”.

REI chief executive David Fitzsimons said: “March 2016 was the second most productive month since June 2007, the primary reason being that Easter fell in March as opposed to April last year and this had a particularly positive impact on grocery for the month.”

He said that despite the rise in some sectors, the decline in areas such as furniture and flooring “points to the impact of a dysfunctional and inactive housing market.”

“This is both an urban issue and a regional issue. Towns and villages around the country are falling into decay while developers wait for an economic price point at which to commence building (or) refurbishment projects,” he said.

“This is not being helped by the damaging effect of the continuous stream of repossessed properties being released to the market at knockdown prices in areas where supply already outweighs demand.’

REI said overall the first quarter of the year was “reasonable”, however it added, “With a March Easter helping to lift sales it is most likely that April 2016 will trade behind the same month in 2015, and especially so should a government not be formed in the month.