OVER THE PAST several weeks, Fora has taken a look at some of the more notable big-ticket projects that were floated during the Celtic Tiger period – or in the aftermath of its demise.

Most recently, we detailed the story behind plans for a ‘park in the sky’ on O’Connell Street. The project would have seen a major revamp of the thoroughfare to make it a shopping hub, and the centrepiece was to be a 12-storey, triangular building that would house a park on its roof.

In this installment, we’re going looking at a development that was to be built just down the road.

Cable cars are a feature in several Western cities such as San Francisco, and developer Barry Boland wanted to bring them to Dublin. Here’s how that panned out.

Boland wanted to build a cable car system that would run from around Heuston station to the Dublin docklands, providing a tourist attraction along the River Liffey.

The company he set up to manage the project, the Liffey Cable Car Company, originally submitted a proposal to build four towers along the river, two of which would have been 80m tall.

This would have put the towers among the tallest structures in the country and about 20m taller than Liberty Hall. 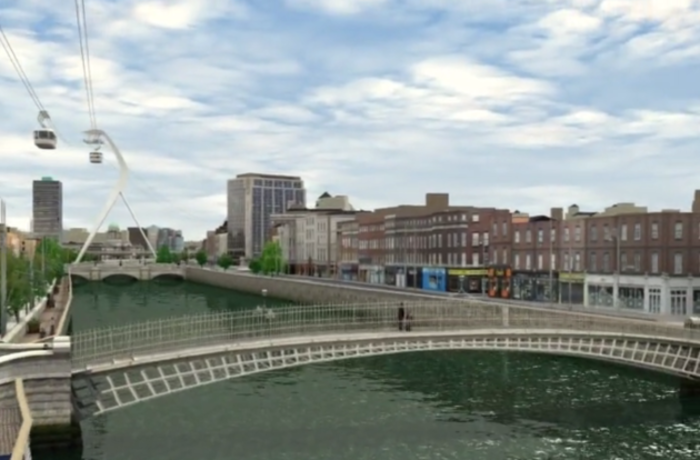 A concept image of what 'Suas' could look like
Source: Vimeo

The towers would have been used to suspend the cable cars in the air and run them along the length of the river. The cars would each hold 25 people and passengers would pay €15 for a one-way, 20-minute trip.

Boland would later tell the Herald that the objective of the project, which was dubbed ‘Suas’, was “to create a Dublin icon along the lines of the London Eye or the Eiffel Tower”.

“We’re not looking to compete with tourism venues along the Liffey but work alongside existing tourism attractions and add something that enhances the route,” he said.

The project was first estimated to cost €90 million. Boland tried to get it fast-tracked by asking An Bord Pleanála to rule that Suas could qualify as strategic infrastructure.

Planning permission could not be submitted without approval from the council as the supports for the cable car would be located on public property.

However if An Bord Pleanála had ruled that the development was strategic infrastructure, it would have bypassed many normal planning rules. The planning board ruled against Boland in 2007. 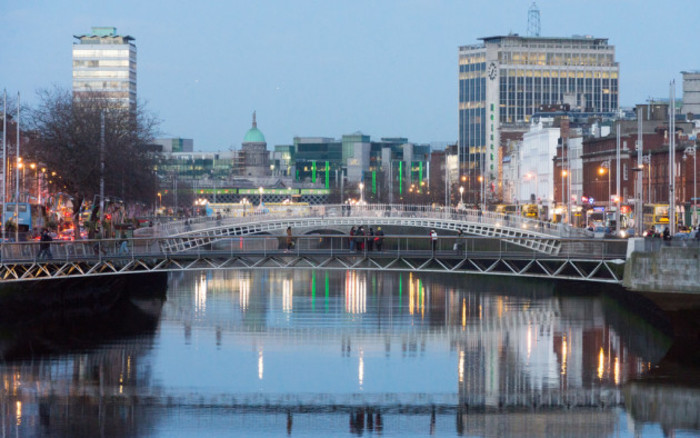 In 2008 it was reported that Boland wanted to make a presentation on the project to Dublin City Council’s environment special policy committee.

The Herald later reported that Boland had the “sizeable amount of money necessary for the project already in place” and was looking for support from council officials.

Suas was floated again in 2014, when it was debated by Dublin city councillors. Labour councillor Dermot Lacey proposed the motion, saying that it was an idea “worth pursuing”.

Suas seems to have dropped off the radar after the flurry of media reports in 2014, and there has been virtually no mention of it in the press since then.

Some officials are thought to be cool on the scheme and the potential impact it would have on Dublin’s skyline.

When Fora contacted Boland, he maintained he was still hoping to submit a planning application for the project.

“We fully accept that the Suas project will have an impact on the Dublin skyline,” he said.

“We would argue that it will have a positive impact, but we are anxious that our application for planning permission should go forward to Dublin City Council.”

However, Dublin City Council told Fora that the organisation “has not given approval for its lands to be included in any application”.

“No planning application from any party has been submitted,” a spokesman confirmed.

For his part, Dublin councillor Lacey said that he has not heard of any progress on Suas, but that he would still be in favour of more discussion of the idea.

“My own view is that they should be able to proceed with planning. The city council regularly allows applicants to put city land in planning bids without saying that they will support the project.

“I always said that I may oppose the project in the end, but they should at least be able to apply. I wanted a debate to take place. My concern is that people won’t bring forward imaginative ideas in the future if they’re shot down at the first planning hurdle.”