THE SO-CALLED ‘BEAST from the East’ provided a huge boost in sales for Irish grocers, according to analysis by market research firm Nielsen.

Shoppers spent almost €10 million more on groceries the week of the storms compared to the week before. Looking at year-on-year sales, consumers spent an additional €15.2 million in supermarkets and corner shops.

Heavy snowfall battered the east coast of Ireland in the last week of February into early March.

With major disruptions to public transport and some roads impassable by car, consumers stocked up that week on a number of items like frozen food, alcohol and dairy products.

According to Nielsen’s research, convenience stores – which normally account for just over a third of grocery sales – accounted for more than half of the increased week-on-week spend.

Clark said the “beauty of the beast” was that people spent more in virtually every category in the grocery market.

“However, the real growth was not in staples such as bread and milk but indulgent categories such as alcohol, confectionery and snacks,” he said.

Researchers at Nielsen identified wine, beer, frozen food, milk and cream and crisps and snacks as the top five categories that saw the biggest increase in week-on-week sales. 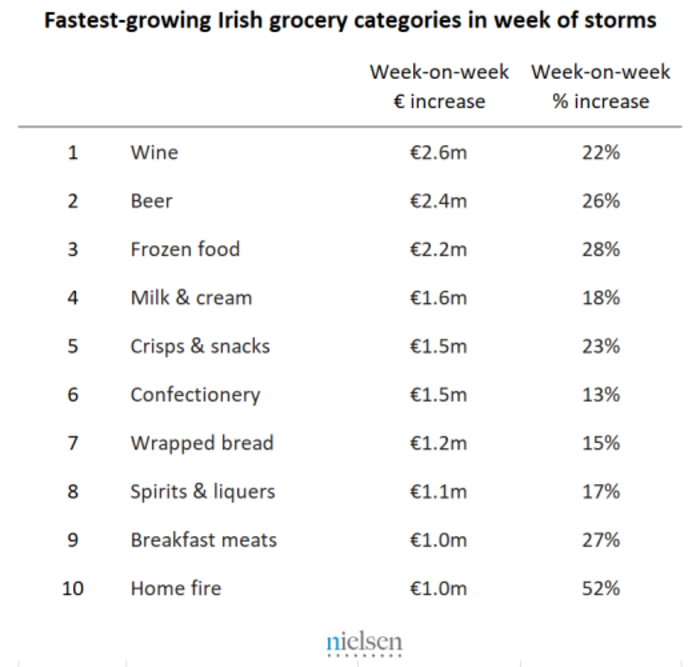 Clark said it seemed like shoppers were in a holiday mood and were “tempted to treat themselves during the lockdown”.

“For retailers, it was a case of warm trade winds blowing in – particularly for convenience stores as the few shopping forays could only be done on foot,” he said.

Despite the bump in weekly grocery sales, the retail sector as a whole has previously stated that snow-related closures is damaging for the industry.

A government-enforced curfew during the Beast from the East storms meant that many shops were forced to close and experienced a period of lost trade.