A LARGE-SCALE CORK housing development has been given the all-clear by the national planning body under new fast-track laws.

The Ballinglanna residential scheme is the first housing development outside the capital to receive planning permission as part of the ‘Strategic Housing Development Scheme’.

The developer sought permission for its plans from the national planning authority through the fast-track scheme – new laws that allow large housing projects to bypass the local council planning system.

The application also included a request to demolish a number of agricultural buildings on the site. The plans feature a crèche, a retail unit and the reservation of a 1.2-hectare site for a 16-classroom school.

Last week, An Bord Pleanála granted O’Flynn Construction permission to start work on the development. This is largest housing scheme granted permission so far under the new fast-track development process.

O’Flynn Construction’s application said that the majority of the scheme would be made up of two-, three- and four-bedroom semi-detached and detached houses.

Half a dozen three- and six-storey apartment blocks will make up the rest of the development and account for just over a sixth of the 600 housing units.

In a statement, O’Flynn Construction said it has planned to commence construction on the site this summer and the first units will be on the market by next February. 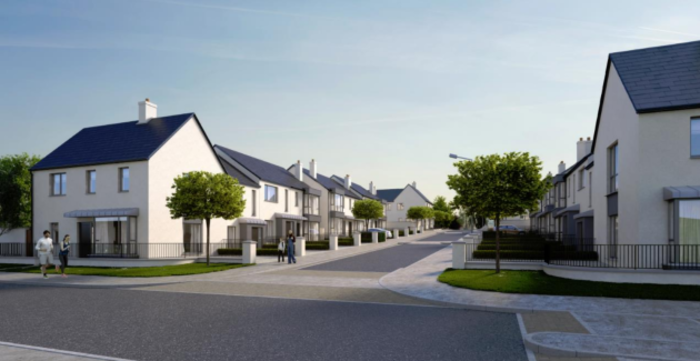 An artist's digital mock up of the new houses.
Source: O'Flynn Construction/Ballinglanna

Speaking about the decision, the firm’s managing director, Michael O’Flynn, welcomed the speed of the planning body’s decision-making process.

He added that he was pleased that no “significant changes” to the scheme were suggested by An Bord Pleanála.

“Large residential schemes like Ballinglanna inevitably end up on appeal. So the new Strategic Housing Development process which allows applicants and third parties make their submissions directly to An Bord Pleanala is a welcome change and certainly can help address the housing crisis in a more appropriate and timely manner.”

The lack of available housing in Ireland has been labelled the country’s “most-pressing issue” at present.

Last year, the stock of properties available for sale nationwide hit a “critical low” as the cost of buying a house rose at the fastest pace in several years. The Society of Chartered Surveys Ireland has previously predicted the housing crisis could last another 10 years.

Last month, Investec economist Philip O’Sullivan noted that 21,500 new homes are expected to be completed this year, with a further 24,000 in line for 2019.

However, he added that the current level of development is at least 10,000 units below the required level to keep up with demand.