OVER THE HOLIDAY period, Fora is taking a look at some of the more notable big-ticket projects that were floated in and around the time of the Celtic Tiger.

Previously, we gave a brief rundown of the Metro North. While long-delayed, there is a clear need and demand for such a project, and has been for years.

Today we’re taking a look at an idea that is slightly more left-field – an enormous ‘Chinatown’ hub in Athlone.

The ‘Europe China Trading Hub’ was a grandiose plan announced during the depths of the recession in Ireland.

It was the brainchild of a company called Athlone Business Park Ltd, which is owned by local developers Aidan Kelly and Michael O’Sullivan. Former Roscommon county manager John Tiernan acted as chief executive.

The idea was to establish a centre for international trade between China and the rest of the world at a site just outside Athlone in Westmeath.

The centre was to provide a demonstration space for Chinese traders to sell their goods to European and international buyers, with a view to generating big, bulk orders.

Phase one of the project was expected to include facilities such a huge four-storey reception hall, nine trading halls, an underground car park with space for over 1,300 cars and a wind turbine. It was expected to cost about €175 million to develop.

If that was successful, it was hoped that there could be as many as four additional phases of development building on the plans. The first phase would have seen 1,500 jobs created.

Plans for subsequent phases were even more outlandish, suggesting the construction of everything from a five-star hotel to a shopping centre and even mentioning the possibility of building an airport.

The plans were publicly revealed in 2012, although planning applications were submitted in 2011 and the proposition was likely in the works for years before that as Athlone Business Park Ltd was first incorporated in 2000.

Plans for phase one of the project were submitted to Westmeath County Council towards the end of 2011 and later given the green light.

Half a dozen appeals were made to An Bord Pleanála, including one from An Taisce, which warned that a similar Chinese trading hub was being built on the Wirral peninsula opposite Liverpool in the UK.

Nevertheless, the planning body gave its seal of approval in May 2012, and the intent was that phase one would be completed by the middle of 2015. 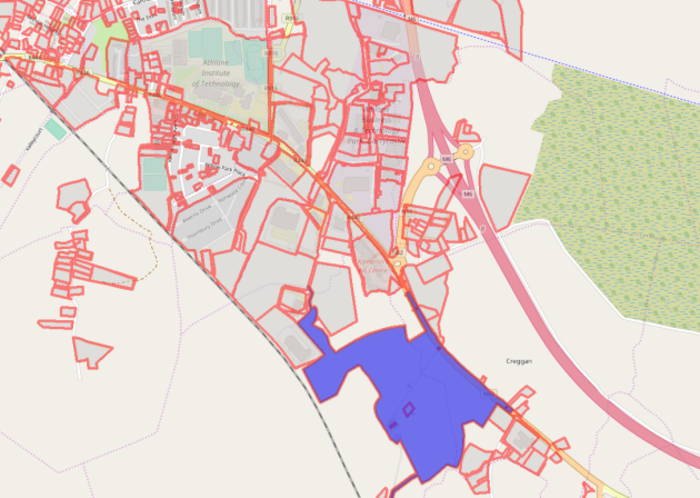 The proposed site, highlighted in blue

Little seems to have happened since the project was given planning approval. The website for the trading hub appears to have vanished, and there has been scarce mention of it in national media for years.

In May 2012 the Irish Independent reported that “Chinese money will finance the project”. It reported in June of that year that two Chinese businessmen, Chunxiao Zhao and Ken Chao, were behind the project and were directors of an Irish company called Inchmin Ltd.

Zhao and Chao were indeed directors of an Irish company called Inchmin Ltd, however that company was dissolved in April 2014.

Athlone Business Park Ltd is still active and filing accounts, but its last set of records, for 2015, show that the company has barely traded.

Barry Kehoe, the director of services in Westmeath County Council’s planning division, told Fora that his office has not heard anything about the project since it was given the green light.

“We granted planning permission a number of years ago for phase one, and we have heard nothing since,” he said.

“We can’t do anything and I’m not aware of anything behind the scenes. Five years is the standard life of any planning application and if they want they can apply for a single five-year extension. It is up to them (the developers) to either implement the project or leave it there.”