THE NUMBER OF British residents searching for jobs outside the UK has jumped since the Brexit referendum, and Ireland is proving to be of particular interest.

According to data from Jobs website Indeed, searches for jobs across the EU from the UK were 7% higher on average in the 100 days after the referendum than prior to the poll.

The strongest interest was in jobs in Ireland, where there was a 20% increase in searches after the UK’s vote to leave the European Union in June.

Indeed research initially showed that job searches from the UK to Ireland on 24 June, the day the result of the referendum was announced, were 2.5 times higher than the average in the days before the vote.

Although the spike moderated, new research from the jobs portal shows that an increase has been sustained in the long term.

There was also a similar pattern among Britons looking for jobs in Australia. Searches for jobs in the antipodean nation were 13% higher in the 100 days following the referendum than before, with the average matching the 13% surge seen in the vote’s aftermath.

There has also been a steady increase in searches from the UK for jobs in Canada, Germany and the EU as a whole.

Indeed did not specify the exact number of searches carried out when contacted by Fora. However, it is understood that the searches from the UK to Ireland are likely to rate in the tens of thousands.

Indeed economic research analyst Mariano Mamertino said that some people may have expected searches for positions abroad by UK-based jobseekers to die down after the first few days of frenzied activity after the referendum.

However, he added: “Our research reveals that the number of searches for overseas jobs remains high. The UK economy has proved resilient in the first few months since the poll, with consumer confidence remaining high and the number of people in work barely changing.

“But a deterioration in the hiring appetite of employers coupled with increasing talk of a ‘hard Brexit’, and returning uncertainty over what that might mean, is now prompting many of those who had been thinking of working overseas to job hunt in earnest.” 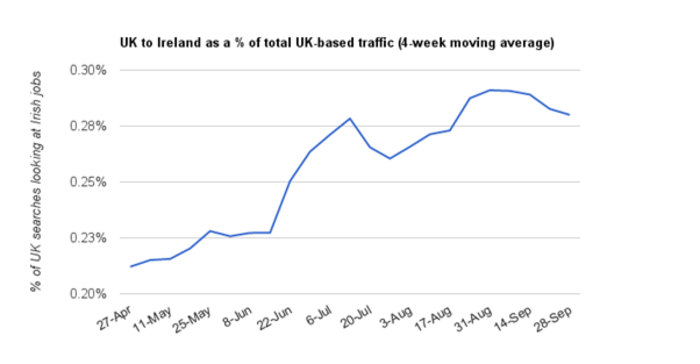 He added that the rise of people looking at jobs outside the UK following the Brexit vote “is both sustained and increasing”.

“As the only English-speaking EU member, with the fastest growth rate and flexible labour markets, Ireland is well placed to attract these labour flows and potentially additional foreign direct investment,” he said.

“Theresa May’s confirmation of the date to trigger Article 50 by the end of March 2017 now makes a ‘hard Brexit’ look more likely, and some of the commentary on immigrant labour from UK cabinet members could unnerve foreign workers and make them consider other options, thereby driving a further spike in October.”