TV3 WILL SHUTTER startup station UTV Ireland before relaunching the channel as the ‘female-oriented’ Be3.

The announcement was made today at a media briefing in Dublin for the TV3 Group’s plans for 2017.

In tandem with the launch of the new channel, the existing TV3 channels – the eponymous station and 3e – are to be given overhauls to position them to reach three specific demographics.

TV3 will be seen as the “grown-ups channel”, according to new director of programming Bill Malone, formerly of RTÉ. 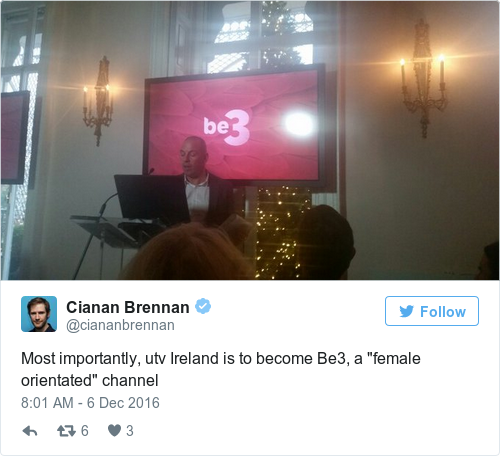 Most importantly, utv Ireland is to become Be3, a "female orientated" channel pic.twitter.com/mi8mYbcQqr

The rebrand will see all three channels sporting new logos. The formerly “unloved, underserved” 3e will become the “fun” channel, while Be3 will be “female focused” and incorporate family programming, Malone said.

“TV3 will become the premium channel, the grown-up channel, and 3e will become, well, what TV3 is now.” 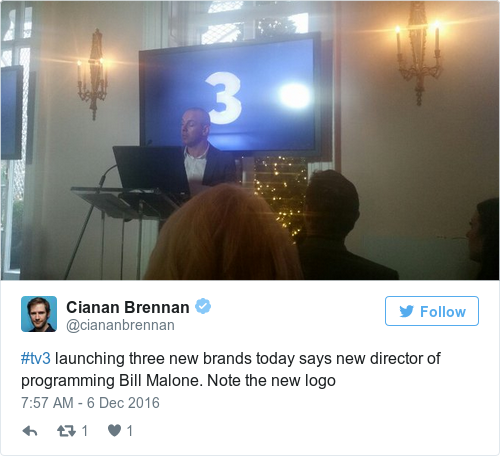 Current affairs programmes such as Tonight With Vincent Browne and Pat Kenny Tonight will remain on the main channel.

3e’s rebrand as the group’s entertainment channel will see it play host to “ratings winners” like Big Brother, I’m a Celebrity, Graham Norton and Jonathan Ross.

A third studio is also set to be opened on the station’s Ballymount campus in January. The rebranding plans announced today were widely flagged in advance. 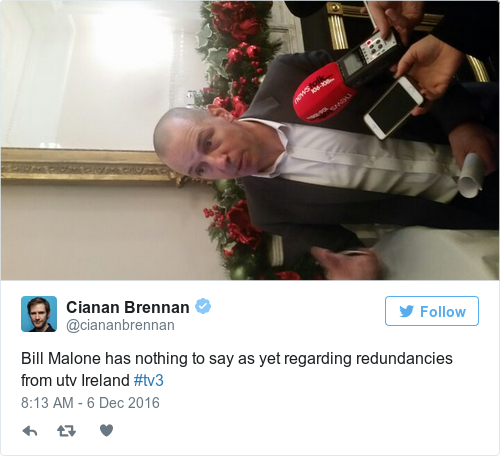 Bill Malone has nothing to say as yet regarding redundancies from utv Ireland #tv3 pic.twitter.com/hoDczHnXdR

The TV3 Group officially acquired the troubled UTV Ireland last week and its parent company, Virgin Media, said only 40 new positions would be open at TV3 after the merger – paving the way for at least one-third of the soon-to-be-defunct channel’s staff to be made redundant.

Malone would not be further drawn on the details of the layoffs that are expected to hit the station.

Employees of the station have been briefed as to what their future holds and what opportunities may be available, he said. As a “consultation period” with those employees is under way, it would not be appropriate to discuss the issue further.

UTV Ireland will cease broadcasting on 8 January with Be3 launching the following day.