THREE MOBILE HAS announced that it will roll out ad-blocking software across its network, making it the first major European mobile operator to do so.

The firm said it has successfully tested the software in the UK and Italy. It said that the tests in Italy and the UK will enable “rapid roll-out of the technology to all other Three Group operators”.

When asked when the software may be implemented across its Irish network a spokeswoman for Three Ireland said: “At the moment this activity is focused on (the) UK and Italy.

“There are no fixed launched dates for the actual product. Once an approach is confirmed, we’ll have more information”.

Three is Ireland’s second largest mobile operator. According to Three Ireland as of September 2015 it had two million customers and a market share of 35%.

The ad-blocking software will be powered by Israeli company Shine. Details of how exactly Shine will implement the technology were not disclosed, although Three said “customers should be entitled to receive advertising that is relevant and interesting to them”.

The move is likely to lead to serious concern among digital publishers and advertisers, some of whom have already seen their revenues squeezed by more widespread use of ad-blocking software by consumers on PCs and mobile phones. 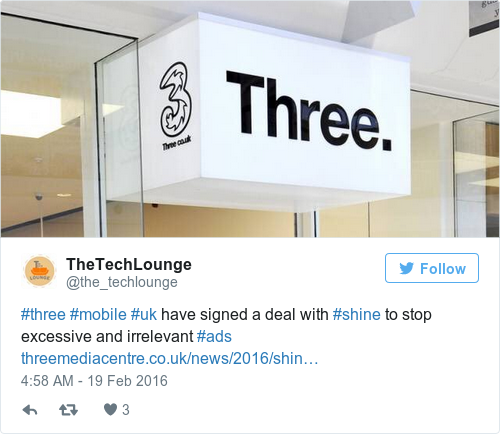 He added: “We don’t believe customers should have to pay for data usage driven by mobile ads. The industry has to work together to give customers mobile ads they want and benefit from.”

Three claimed that one of the reasons for deploying the software is so that advertisers, not consumers, will pay data charges related to adverts. User privacy was also cited as a motive for the change with the company saying: “Some advertisers use mobile ads to extract and exploit data about customers without their knowledge or consent.”

Three said it will announce more details of the scheme in the coming months.

In September Digicel announced it planned to implement Shine’s ad-blocking software across its network Jamaica before rolling out to other markets in the Caribbean and South Pacific.