SKILLS SHORTAGES IN the construction sector and continual rises in demand are fuelling significant increases in the costs for major projects.

The Society of Chartered Surveyors Ireland (SCSI) latest ‘tender price index’ showed that prices for construction tenders jumped nearly 4% in the first half of this year.

The figures will come as unwelcome news to the government, which plans to dramatically increase infrastructure spending in the coming years to cope with a booming population and a backlog of work that was shelved after the financial crisis.

The SCSI predicted tender prices would rise 7.4% in 2018 – a higher rate of inflation than predicted at the start of this year – taking construction prices past mid-2006 levels and only slightly off the Celtic Tiger peak.

The professional body’s president, Des O’Broin, said the increases would be a concern for authorities planning for national projects.

“If the current trend continues, prices will be back at the peak boom-time level of 2007 early next year. The current rate of increase is simply not sustainable in the long-term,” he said. 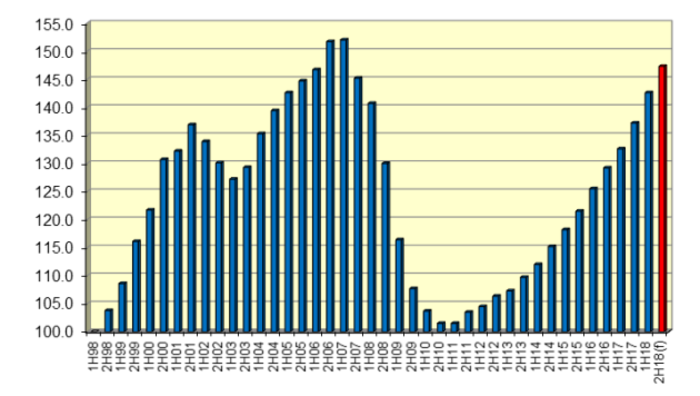 The main reasons for the increases cited by respondents were an “ever-increasing workload” and skills shortages both for contractors and specialist sub-contractors. The prices of raw materials such as steel and timber were also rising.

The survey is drawn up from SCSI members’ tender returns for new, non-residential projects nationwide worth at least €500,000.

It found that prices were rising faster than the national average in Dublin and Leinster, while prices were increasing at a slower-than-average rate in Munster, Connacht and Ulster.

Meanwhile, the latest Ulster Bank construction PMI, released last month, showed building activity continued to grow at a fast pace. Total activity, as measured by the survey, has increase for each of the past 58 months.

Skills shortages have been reported in the construction sector since 2016 despite the number of people employed in the sector sitting at around half the peak figure from early 2007.

The SCSI survey comes as the government plans major increases in spending on capital works under the National Development Plan. Total Exchequer and non-Exchequer capital spending is forecast to rise from €8.4 billion this year to €14 billion in 2027.

Major projects due to be completed within the period include a new metro line connecting Dublin city centre with the airport, several motorway projects and the National Children’s Hospital.