BUSINESSES AROUND THE country are trying to get back to normal today as they grapple with the aftermath of Storm Ophelia.

Thousands of homes and businesses are still left without electricity, with authorities working to restore power.

Many premises have faced some impact, although the damage may not be as bad as was initially feared.

Yesterday morning just as Ophelia made landfall in Ireland, Merrion Stockbrokers issued a briefing note in which it said that the storm would likely do at least €500 million of damage.

However, speaking to Fora this morning senior analyst Darren McKinley said that it will likely be “less severe than this”.

“We would expect a few hundred million in damage, rather than €500 million.”

With that in mind we spoke to business figures in several regions to see how different parts of the country were affected.

The rebel county was one of the areas most seriously affected by Ophelia, being one of the places where it first made landfall.

Sarah Foley, an executive at Cork Chamber of Commerce, said the storm had a “fairly major impact on the city and county”.

“There are still about 90,000 homes and businesses without power. The scale of the impact here is more pronounced than in other parts of the country,” she said.

However, she added that there was “not as much damage done as could have been feared”. 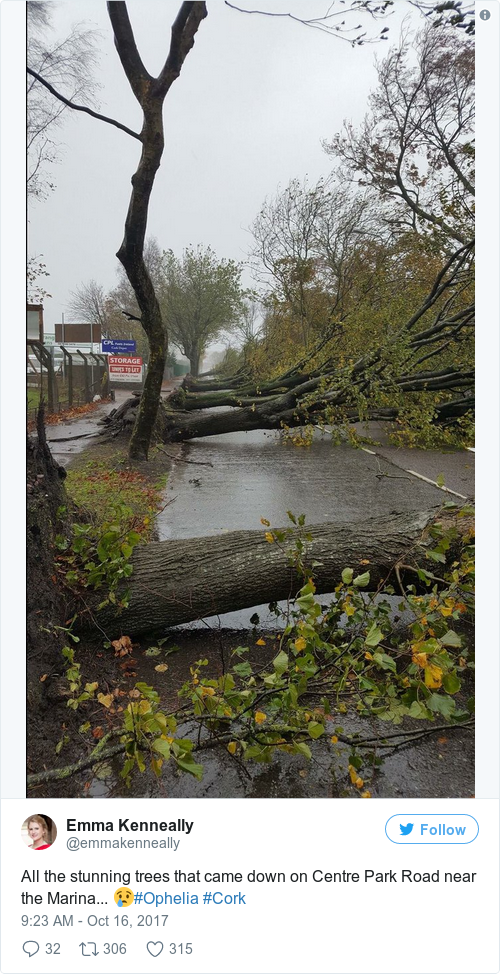 All the stunning trees that came down on Centre Park Road near the Marina... 😢#Ophelia #Cork pic.twitter.com/qQ2nPrYsHo

“Everyone knew it was coming and could protect their properties. We haven’t seen extensive flooding and no main bridges collapsed. It could have been much worse if flooding and high tide had occurred at the same time,” she said.

“We were lucky, but it’s a bit of a wake-up call. It highlights how vulnerable we are and how we need to take precautions and invest in protections against storms and floods.”

Ophelia first made landfall in Kerry before working its way throughout the rest of the country.

Paul O’Neill, the president of Killarney Chamber of Commerce, said that while there are many more remote areas that are without power, the town itself escaped the worst of the impact and most businesses are trading as normal again after closing yesterday.

“We were all concerned yesterday, there’s not much you can do as a business owner, you’re just hoping that you’ll get away with a little amount of damage,” he said.

“We were lucky enough. There are lots of power outages but in terms of damage or major incidents, I haven’t heard anything like that to date.” 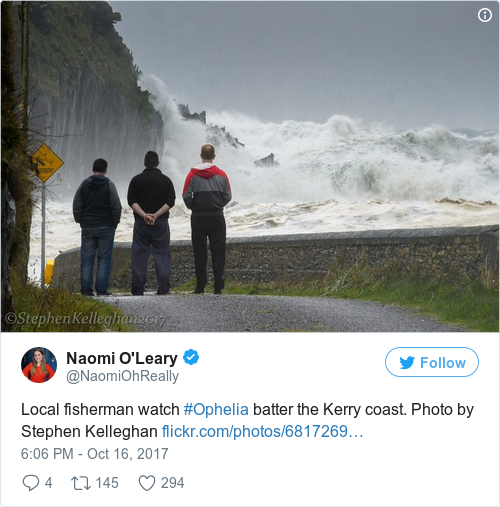 Kieran Ruttledge, the CEO of the Tralee Chamber Alliance, said that the northern part of the county was not as badly affected.

“Tralee got off lightly, south Kerry bore the brunt of the storm. A lot of the electricity issues were in south Kerry,” he said.

“Yesterday 90% of businesses were closed, but now we have returned to normal. Although the schools are closed everything else is open as normal today.

“I know of some issues, like trees coming down, but it’s nothing that can’t be handled.”

Thousands of homes and businesses are still without power in Ireland’s third largest city, although Limerick centre managed to escape serious flooding.

James Ring, the head of Limerick’s business chamber, said that while there was an impact, it was “less than what we had been expecting”.

He contrasted it to Storm Darwin in 2014, which he said “destroyed Limerick”, and said that authorities learned from that experience.

“The entire city was in shutdown, but the city didn’t really get hit (by Ophelia), it was more in rural communities,” he said.

“I think we learned a lot from 2014 as to what could happen in Limerick. 2014 decimated everything, that was what we were expecting (yesterday), but we probably escaped. We’ve had people take some days off but apart from that it’s as normal.”