IRELAND RANKS JUST above the US in terms of social benefits and is lagging behind the other major EU economies, according to a new analysis.

A study from the employer-comparison site Glassdoor looking at the social policies of 15 countries showed Ireland is the second-least generous for benefits and is only ahead of the US.

Denmark, France, and Spain have some of the most-generous social benefits in the EU, offering workers the highest maternity pay, paternity pay, annual leave and sick pay.

Sitting with Ireland at the other end of the spectrum are Switzerland and the UK, with all three countries scoring poorly in the report’s index. 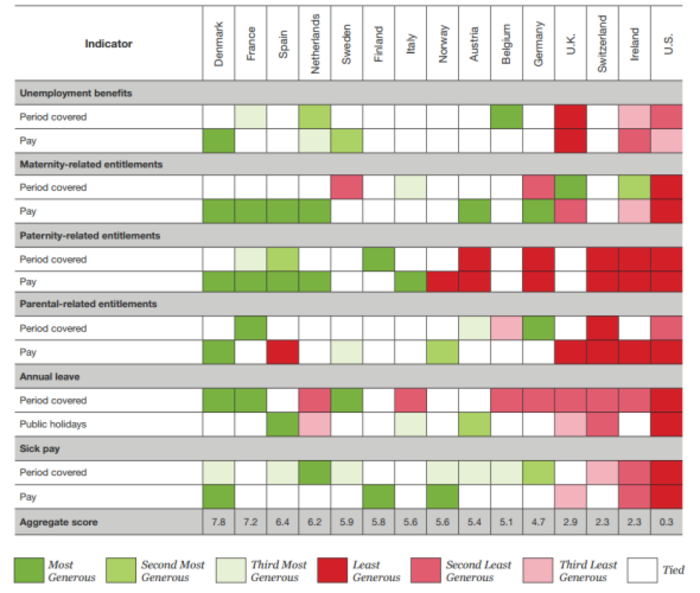 Offering unemployment benefits at a flat rate of €188 per week, Ireland is the third-least generous of the 15 countries assessed, with the UK and US propping up the list.

The most-generous state in the EU for unemployment benefits is Denmark, which offers 90% of previous earnings for up to 104 weeks after leaving a job.

On Tuesday, Fine Gael made an election promise to increase jobseekers allowance to €215 per week for the first three months a person is out of work.

After that period, the payment would fall to €200 per week for the following three months and then to the standard rate of €188 per week.

Ireland also ranks poorly among other EU countries for days of sick leave offered to workers, with this benefit largely dependent on what is outlined in employees’ contracts.

Countries on the continent also benefit from more public holidays and days of annual leave.

Sweden, France, and Denmark lead the way with days of annual leave on offer to employees who work a traditional five-day week, while Spain has the most paid public holidays at 14 days.

By a significant margin, Ireland and the UK offer more maternity leave than other EU countries that are part of the analysis.

All EU countries are required to offer at least 14 weeks maternity leave, with Germany and Sweden choosing to offer the minimum amount of time off to new mothers.

Despite offering the second-most maternity leave at 42 weeks, Ireland ranks poorly among other European countries in terms of benefits for parents.

Unlike other EU countries that offer new mothers between 80% and 100% of their previous earnings during their maternity leave, Ireland offers a flat rate of €230 per week.