SAMSUNG IS CONFIDENT that Irish consumers will be keen to splash out over €1,000 on its new high-end smartphone, despite fire-safety issues around the previous model.

This week, the South Korean company launched its new flagship smartphone, the Galaxy Note 8, in Dublin.

The phone went on sale in Ireland and internationally yesterday, on the same day that Apple’s new iPhone X model became available for pre-orders online. The Note 8 costs $929 (€776) in the US and €1,019 in Ireland.

The phone has been well-received by critics so far, who praised new features such as an improved display and a dual rear-camera setup which allows users to take better pictures.

It has 64 GB of internal memory, which customers can supplement with extra, external memory. How the Note 8 performs will be closely followed by Samsung following on from the debacle of its predecessor, the Note 7.

Parts of the Note 7 were faulty and resulted in many reports of the phone exploding and catching fire. The episode proved an expensive one for Samsung, which had to spend big to recall the phone and cover the costs of refunding customers.

Russell Keating, the head of sales for Samsung’s Irish division, said that despite the high-profile error with the previous phone, the company is confident that the Note 8 will be a best-seller in Ireland.

“The Note 7 is something that Samsung have apologised for, and I was impressed with the way the company dealt with it, compensating consumers and recalling phones,” he said.

“Our batteries are now the most successful in the industry and our consumers here (in Ireland) are extremely confident.

Asked if he thought Irish consumers may be wary of the Note 8 after the Note 7, he said: “I think they’ve moved on. We’ve seen a successful pre-order campaign, interest in the Note is as strong as it’s ever been.” 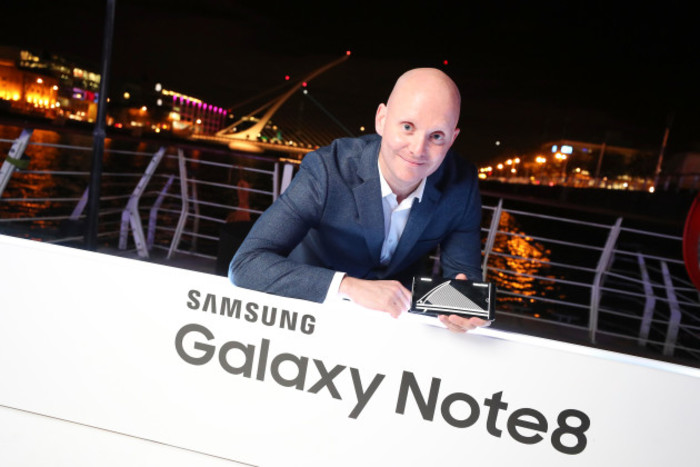 The price of the phone is also a slight increase on the Note 7, which sold for €999 in Ireland. The new iPhone X is set to cost €1,179, meaning two of the most popular premium smartphones sold here will cost more than €1,000.

Nevertheless, Keating believes some consumers will be prepared to pay the sizeable sum for its flagship smartphone.

“With the Note in order for us to include new features there is a premium price point. I can’t release sales figures, but if you look at the market info we’re the biggest premium smartphone brand in the country.”

“We’ve had great success in Ireland and consumers are opting larger tablet screens (like the Note 8), we think the phone will allow customers to do more.”