GOVERNMENT-IMPOSED CONTROLS are fuelling a two-tier rental market as the severe shortage of accommodation continues to push prices into uncharted territory.

The latest rental report from property site Daft.ie shows that the average rent across the country hit €1,131 per month – up 13.4% in the year to March.

The rate of price inflation was the second-highest in the 11-year history of the pricing series, while the 3,084 properties listed as available for rent on 1 May was the second-lowest on record.

The greatest annual increase was in Dublin, where prices were up 13.9% during the year to an average of €1,668. These were the changes elsewhere in the country:

Rents in the capital are now 15.4% above their Celtic Tiger peak of early 2008, before the property bubble’s dramatic deflation, and 66% above the average price during the trough of the recession.

Meanwhile, the fastest rates of increase were in many of the commuter counties around Dublin, with rents in Louth up 18.3% during the year, followed by Meath at 16.7%. 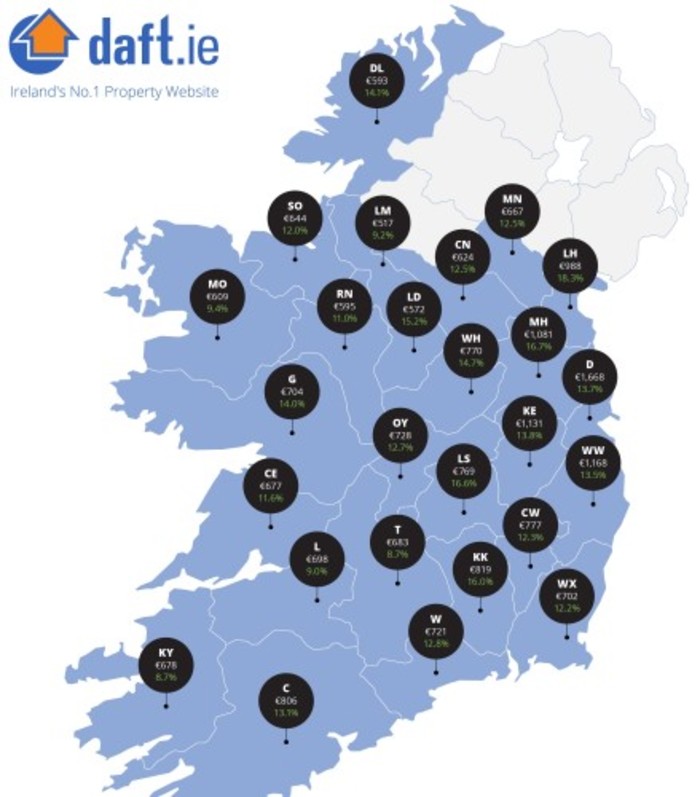 “Regulatory measures designed to limit rent increases could only ever have a very limited effectiveness in a market with such a scarcity of supply,” he said.

“Indeed, there is evidence to suggest that rent increases for sitting tenants have been only half the size of increases faced by new tenants.”

In December, the government introduced a system of designated ‘rent pressure zones’ across the country in a bid to stall spiralling prices.

The measures capped annual rent rises at 4% in Dublin and Cork city, with another 12 regions including Galway city added in January.

However, in the report, Lyons said that people in existing tenancies already enjoyed a sizeable discount overall compared to those who had moved homes. Since 2013, market rents increased more than 50%, but so-called ‘sitting’ rents were up only 27%. 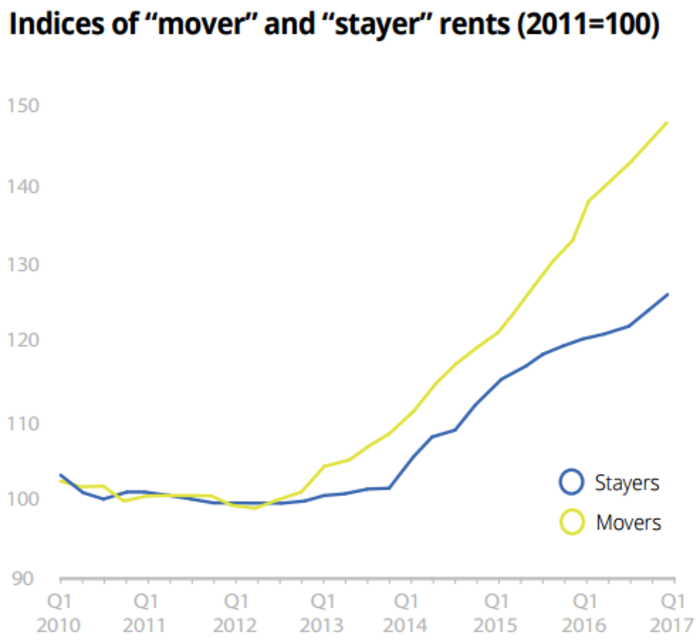 “This may mean that the ‘rent pressure zone system makes things worse, rather than better, by amplifying the insider-outside nature of the rented sector,” Lyons said.

“Sitting tenants now enjoy not only a discount relative to the market rent, but also protection of that lower rent into the future. Meanwhile, movers in the private rented sector face not only far higher rents but almost no availability in the market.”

New tenants are entitled to request proof from landlords of the property’s previous rent to ensure they aren’t being charged more than the 4% yearly increase.

However Lyons said it would be “a brave prospective tenant” who would demand the proof in such a stretched market, adding that the message was that more supply was needed in the market – as it had been for the past five years.