BETTING GIANT PADDY Power Betfair will put a self-service terminal in virtually every one of its shops as part of an ongoing effort to digitise the brick-and-mortar bookie trade.

Speaking this week at Retail Excellence Ireland’s e-commerce event in Dublin, the bookmaker’s head of multichannel, Cecilia Mourain, said the company first took a punt on self-service machines in 2009.

“That’s very much where we see the future going,” she said. “We think more and more customers will move away from that interaction with a person in a shop.

“We’ve got more self-service terminals than any of our competitors. We keep rolling out more. We’ve got 300 shops (in Ireland and the UK) and we’re rolling out 300 terminals, so one per shop on average.”

Mourain made her presentation the same day it emerged that Paddy Power’s outgoing chief executive, Breon Corcoran, broke ranks with the British betting industry and urged the UK government to introduce heavy curbs on controversial fixed-odds betting terminals, which he described as “toxic”.

Flashy fixed-odds terminals allow punters to play simulated games like roulette, while self-service is more akin to a supermarket checkout machine that allow customers to avoid making a transaction with a cashier. 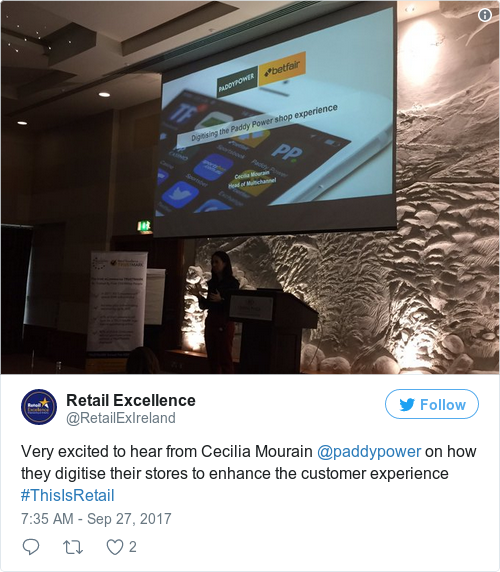 Very excited to hear from Cecilia Mourain @paddypower on how they digitise their stores to enhance the customer experience #ThisIsRetail pic.twitter.com/MkOc4ff2ph

Mourain – who was recruited last year to bridge the gap between Paddy Power’s online and offline trade - said the bookie is still very much banking on brick-and-mortar retail to drive punters online.

“We know that 30% of people in the UK and Ireland bet online and in-shop,” Mourain said. “We also know that this segment of the population is growing faster than people who bet online only. They’re quite an important segment.

“They’re also more high-value in our industry. We know that people we drive online from our shops spend a lot more with us online.”

Two years ago, Paddy Power started putting tablet computers in its shops so customers could sign up for online accounts in-store.

The company also made it possible for punters to top-up their ‘digital wallets’ using cash, which Mourain said accounts for more than half of Paddy Power’s online sales.

“In Ireland, in particular – which is still very much focused on cash – customers do value that service of being able to pay for their online service using cash,” she said, noting that cash gives customers a degree of anonymity, which is “key to our retail proposition”.

“In our world, we know that our customers want to go to a shop because they value the atmosphere, they like the social experience they get from it, they like the ability to pay in cash and they want to remain anonymous,” she said.

Paddy Power made anonymity a big part of its ‘Onside’ app, which was rolled out in January.

“We designed it around a light registration process,” Mourain said. “We know that our customers don’t like to give much information of who they are. As a result, it asks only for a phone number, not an email address.”

Paddy Power is hoping to differentiate itself from competitors through its ‘content’, like in-app information about horse races and by allowing customers to track their in-store bets through the app.

“They can retrieve that bet and they can interact with the bet if they decide to cash up,” Mourain said. “That allows us to prolong the process.”