WHILE THE OUTBREAK of the coronavirus that causes Covid-19 has wreaked havoc in international markets, it has “more than doubled” business at Irish company Novaerus, according to Kevin Devlin, the CEO of its parent company, WellAir.

“We performed testing on a coronavirus in 2016 and had excellent results. This is a broad family of viruses. For obvious reasons now, we’re getting a lot of attention pretty much around the world, more so in the countries that have had the biggest impact,” Devlin said.

The company, which employs about 45 globally, makes three types of air-disinfecting devices, the bedside-sized Protect 200, the larger 800/900 model and the fridge-sized Defend 1050, designed for “rapid remediation” rather than continuous use like its smaller siblings.

Devlin got involved with the company about three years ago, just after the once research and development-heavy operation went commercial.

“I saw an exciting technology that could have an impact in an area where people were paying a lot of attention: the impact of poor air quality on people’s wellness and even things like cognitive function,” he said.

WellAir started around 2012 and has two companies, Novaerus and US-based Plasma Air, which caters more to the industrial sector.

The company also has distributors in the Philippines and Thailand, and countries where “there is a greater awareness of the impact of air quality on people,” he added.

In Asia particularly, there has been a lot of focus on the effects of PM (particulate matter) 2.5 from air pollution caused by energy generation. That’s quickly changing to air-borne pathogens.

The company, he said, is “really launching into China in a big way now”.

One of the company’s biggest markets is South Korea, where its products are used in hospitals and operating theatres across the country.

Novaerus’s air purifiers are mainly for the medical market but it recently launched in the high-end commercial market in South Korea.

“It’s a unique, patented technology where essentially it takes pathogens that are in the air and it brings the pathogens by use of a fan through the device and as they pass across the surface of the plasma coils the pathogens get deactivated – almost like being passed through a sort of microscopic lightning field,” Devlin said.

To measure the efficacy of the products, Novaerus has a test lab where it grows bacteria and nebulises them into an environmental test chamber. It compares decay-rates of bacteria with and without the product inside.

“Once we’re satisfied with the results we get we go to independent test laboratories around the world who have the ability to use viruses, like H1N1, or a surrogate of the coronavirus, MS2, or things like tuberculosis,” he said.

Without the device, nebulised bacteria can linger for hours or days in the air. With the device, say the Defend 1050 for example, which combines the plasma technology with filters “it’s a matter of minutes,” according to Devlin, to eliminate them.

The products are manufactured in Portlaoise, and things have gotten pretty busy for staff, he said, “as people become more aware of the potential issues in their countries as it starts to spread”. 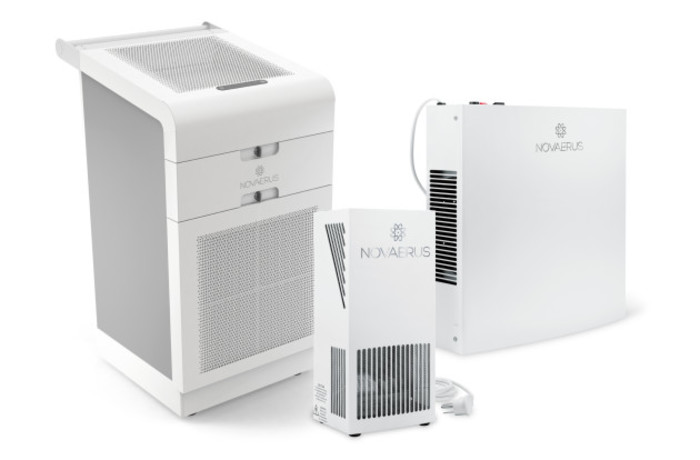 Right now, Novaerus distributes into about 50 countries. Aside from the coronavirus scare, the company has also found a niche in IVF treatments.

“We have one specialist distributor who sells into the IVF sector because air quality has a huge impact on the success rate of fertilisation. A lot of these clinics around the world have been engaging with us to put our larger purifiers into laboratories,” Devlin said.

Hospitals worldwide also want the units for their operating theatres, sometimes two or three smaller wall-mounted units rather than the larger product.

“We have examples of the product being used in practically every department in various hospitals around the world,” he said.

When it comes to hospital-acquired infections, the focus is usually on hands and surfaces, Devlin said, adding that “often these viruses or bacteria get onto surfaces through the air. We believe you need to close that infection control loop, the hands, surfaces, and air.”

There are inbuilt air purification systems already built into hospitals of course, but according to Devlin, these are often not properly maintained or not adequate when it comes to pathogens.

“Viruses are so small that they can pass through the standard filters that would be used in a hospital,” he said.

Right now, the company doesn’t have many outright competitors. Other disinfection techniques, such as hydrogen peroxide and UV radiation lamps, aren’t safe for use close to patients.

But with the events of the last few weeks, the technology in the sector is likely to change in response to how the world has dealt with the coronavirus pandemic.

“Clearly hands and surfaces play a key part in any infection protocol, but the air has a part to play there as well if we want to control it,” Devlin said.

“I think that’s an argument that at times fell on deaf ears but people are so aware of it now,” he added.

As for more companies moving into the space, that’s likely, Devlin said – but it will take years to refine the products.

“Like in all industries there’s a lot of people making very bold promises but the difference with us is, we’ve always said we’re science and data-based.”