TRUSTEV FOUNDER PAT Phelan has announced a €10 million fund open to Irish firms that are ready to scale their operations into the US.

The Cork native, who sold his anti-fraud startup for up to $44 million in December, unveiled the New York-based investment outfit at a European Technology Summit in his home city this morning.

Called Nohovation Partners, the “super angel investment company” is described in a brief blurb on its website as an outfit “founded by entrepreneurs, for entrepreneurs”.

“We invest in start-ups, acquire later stage companies and advise businesses and funds of all size on strategy and execution,” the description said.

Update: The Nohovation fund will have a total pool of €25 million, with the remaining €15 million available for both follow-on and series A investments. The initial €10 million has been set aside exclusively for Irish startups.

In a statement, founders Phelan and Illann Power said the fund was “backed by some of Ireland’s leading angel investors” and would “give entrepreneurs a chance to achieve their goals” with finance and experienced advice.

It was looking for companies that needed at least €1 million in investment and were ready to “setup a large sales force and massively scale up revenues (for) the US market”. 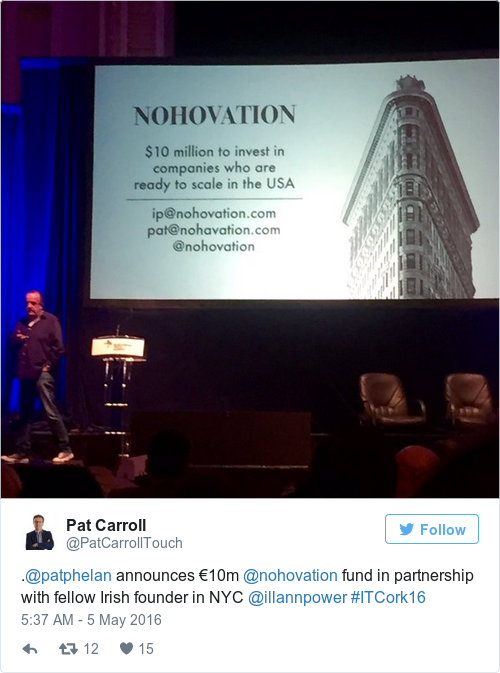 Phelan took up a role in New York as senior vice president of TransUnion after the US credit-checking giant completed its buyout of Trustev.

He said Ireland “has continued to punch well above its weight in terms of producing high-quality companies and entrepreneurs”.

“However the bar has now been raised extremely high in terms of procuring a series of funding without the required revenues to able to justify a higher valuation. It is now time for egos to be left at the door and to get down to business.”

Power, the fund’s managing partner, founded Dublin Distillers before selling the company last year. He is also now based in New York.

Clarification: An earlier version of this article said the fund was in dollars, however we’ve since been told the correct currency is euro.