BUSINESS GROUP IBEC has hit out at proposed changes to the rules for building student accommodation in Dublin city, saying the plan will undermine the capital’s position as a global education hub.

Dublin City Council is proposing several variations to its 2016-2022 development plan, one of which would alter the regulations governing how student housing proposals are assessed.

However the council is now proposing that this area be expanded to 1km. The organisation is in the process of examining public submissions about the proposal before it is implemented.

In a submission to the local authority, Ibec, which represents many large businesses, said that the changes would undermine Dublin’s attractiveness “as a city in which to live, study and work”.

“It would communicate a message that the Dublin city area is only for students living at home or those willing to compound the housing shortage by competing for the sparse availability in the private rental sector,” it said.

“Dublin City Council must counter the perception that students are merely welcome to study in the city, but not to live in it.”

The group’s senior policy executive, Aidan Sweeney, called for the proposal to be rejected.

He said that it could make it “extremely difficult to provide purpose-built student accommodation” in an area near existing student premises.

“This would dramatically reduce the amount of areas available to build accommodation that is of good quality and affordable across the city.

“The result will be to push future student housing provision to the outskirts of Dublin and beyond, impacting upon the quality of student life and on the future economic growth of the city.” 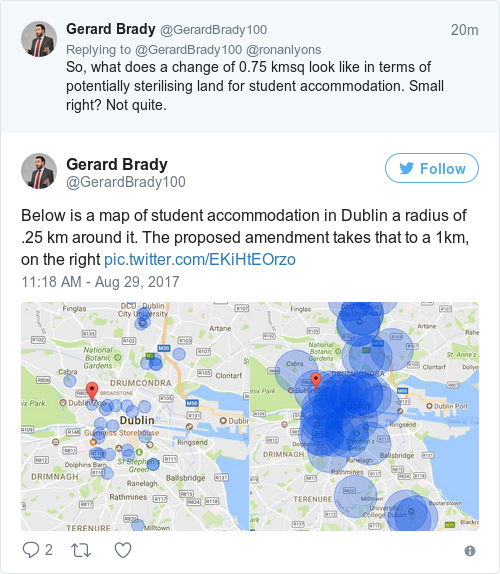 Below is a map of student accommodation in Dublin a radius of .25 km around it. The proposed amendment takes that to a 1km, on the right pic.twitter.com/EKiHtEOrzo

Sweeney added that the council should “facilitate, not restrict, the supply of quality and affordable student housing”.

“Our planning system must stand resolute in the face of a growing, yet unfounded and short-sighted, opposition to purpose-built student accommodation,” he said.

“This proposal ignores and seriously undermines Dublin’s distinct advantage as a global hub for education.”

Dublin City Council did not respond immediately to a request for comment.

Several parties have previously said that the capital lacks purpose-built student accommodation and more is needed as the city struggles with a housing shortage, although some developers have been criticised for the high prices facing tenants.

Meanwhile, the latest Daft.ie rental report showed a record low number of properties available to rent across the country.

The report’s author, Trinity economist Ronan Lyons, said that Dublin needs the equivalent of a block of 300 student beds approved every month until the late 2020s to cope with demand.

Sleeping Giant: The Irishman at the coalface of global sleep technology
The tech sector continues to drive the Dublin office scene but it's creating a two-tier market
From apps to taps: Where Ireland sits in the march toward a cashless society
As Ireland has it's first real ballot box contest in years, communication will be key