LIMERICK HAS SOME of the most deprived areas in Ireland, new data published today has shown.

According to the Pobal Deprivation Index, the John’s A electoral division in St Mary’s Park in Limerick city is the most disadvantaged are in the country.

From 2006 to 2016, Limerick City also had the biggest drop in its absolute index score of any local authority area. It also saw a decrease between 2011 to 2016.

A section of Dublin 2 that includes Stephen’s Green and Grafton Street was found to be Ireland’s most affluent area, while Dun Laoghaire-Rathdown saw the biggest increase in its score from 2011 to 2016 of any local authority.

It was one of the few local authority regions that saw a rise in its index score between 2006 and 2011, during much of which Ireland was in recession.

The index, which is based on Census 2016 results, classes areas as deprived or affluent based on rates of low education, adult dependency, lone parents, skilled or professional workers, unemployment and rented accommodation.

The overall trend indicates that affluence is highest in the urban peripheries and gradually declines once moving towards rural locations.

In its findings, the authors of the index state that there are “rings of affluence” around built up urban areas, particularly around the Greater Dublin Region. 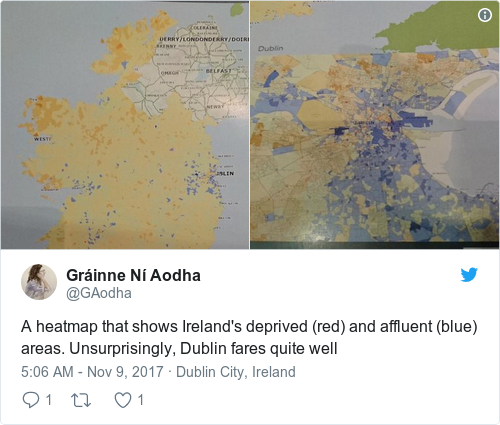 These were less affected by the economic crisis and austerity than more disadvantaged areas of the city and more isolated rural areas.

To illustrate this, the report said that while Ireland as a whole saw a decline in mean absolute index score by 6.6 points, Dublin city declined by just 3.8 points.

The “absolute index score” is an indication of deprivation which reflect changes in the national economy.

However, several areas in Limerick were classified as affluent, most notably in the city’s commuter belt. This was a common trend in many cities across the country.

Certain areas in Donegal, Mayo, Kerry and Clare were classified as “disadvantaged”, with unemployment rates of between 12% and 36%.

Small towns, which are defined as having a population of between 1,000 and 5,000 people, were worst hit by the recession and benefited less from the recovery than the most urban and even the most rural areas.

With reporting from Gráinne Ní Aodha