DUBLIN COUNCIL WILL outsource the management and upkeep of the Liffey boardwalk for the first time as the stretch struggles to shed its reputation as a place unsafe for local and tourists alike.

The local council has handled maintenance of the boardwalk since the riverside path’s development in a number of stages in the 1990s and 2000s.

However Dublin City Council recently issued a tender for an outside firm to clean and replace decking, seating and handrails on the boardwalk. Management of the café kiosks along the riverside stretch will be part of the contract.

The successful bidder will also be responsible for filing weekly and monthly reports about the condition of the walkway and carry out works necessary for its upkeep.

The tender document noted that the firm awarded the contract will also be required to remove ‘love’ locks from the boardwalk’s railings.

Graeme McQueen, head of public affairs at Dublin Chamber, which represents businesses across the capital, told Fora that the boardwalk in the heart of the city’s tourist centre has been a missed opportunity.

“There is so much potential with it, so it’s a frustration that we haven’t been able to make it work,” he said. “There is huge potential to use the waterfront probably a lot better than we do at the moment.

“You go to other cities abroad and they have these other types of facilities and they work very well.

“When you do walk down the boardwalk on a nice sunny day, it is a lovely place to be and it’s just unfortunate that we’ve never been able to get rid of the social issues around it.” 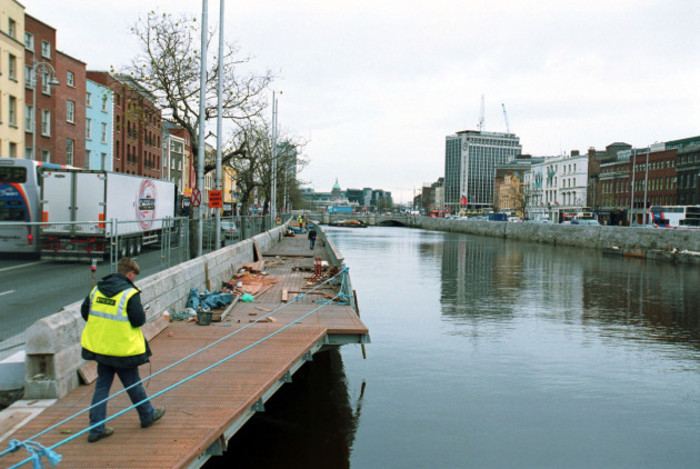 The boardwalk under development in 2000
Source: Eamonn Farrell/RollingNews.ie

In recent years, Fianna Fáil singled out the boardwalk as a ”drugs haven” and an “extremely upsetting and intimidating” place for tourists when it called for the creation of a ‘public order unit’ to crack down on anti-social behaviour in the city.

Meanwhile, googling ‘Liffey boardwalk’ returns similarly negative reviews relating to the walkway. The first result is a link to a TripAdvisor forum titled: “Stay away from the boardwalk at the River Liffey.”

However Dublin Discovered Boat Tour owner Mícheál Ó Cionna, who has been operating River Liffey-based tours from the boardwalk for the past 12 years, said the reputation of the walkway is “completely unfair”.

“Dublin’s issues are not confined to the boardwalk – it is thronged with people during the summer time who come to sit in the sunshine,” he told Fora.

“There might be some incident and it gets blown out of all proportion. On any run-of-the-mill day, it is the same as any city centre location.”

However, Ó Cionna said he is envious of the investment in nearby areas such as O’Connell Street – adding that the boardwalk needs extra upkeep due to its riverside location.

“It’s along the water, which brings the seagulls in particular and they gather in the winter months and destroy the place.

“Like anywhere in the city centre, I suppose, it could also do with a bit more upkeep in terms of picking up litter and cleaning graffiti.” 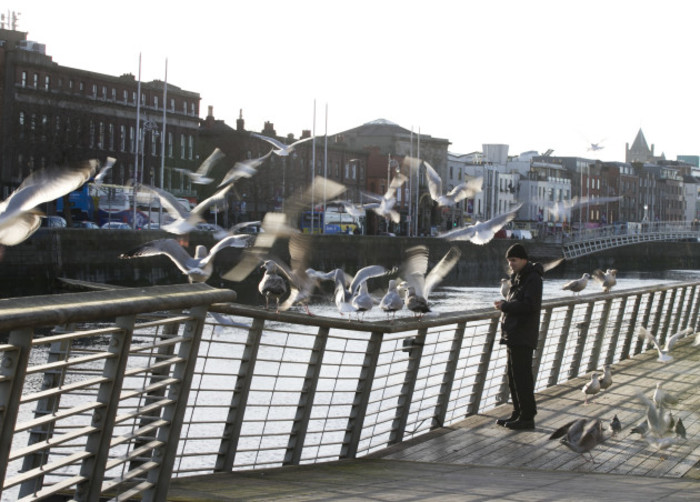 Ó Cionna said the local authority should also look into providing dedicated security patrols for the walkway – something that’s not included in the current council tender. He said a security presence might make people feel safer.

“A good model would be something similar to what they have on the Luas where there are dedicated security to patrol the trams,” he said.

“It means the gardaí don’t have to patrol the Luas itself and its reputation is perfect. Surely it wouldn’t be a great leap to do the same for the boardwalk. It would be cost-effective, because then you would have an amenity that would appeal to tourists.”