SUCCESSFUL FOUNDERS MAY be known for many positive qualities, but picking the right time to step away is not always one of them.

This was the difficult decision Hassle co-founder Jules Coleman faced after her company was taken over by rival Helping last summer in a deal worth €32 million.

When the two online cleaner-booking services joined forces, Coleman initially took up a new role as chief product officer at the German firm.

However, with Helpling based in Berlin and Coleman’s life firmly rooted in London, she said it just wasn’t working out.

“I fundamentally believe that in terms of creating a really good product, you need to be where the heart of the company is,” she told Fora.

“Personally speaking it wasn’t on my radar to move to Berlin. I’ve got a life in London and the last thing I wanted to do was to hold the company back.” 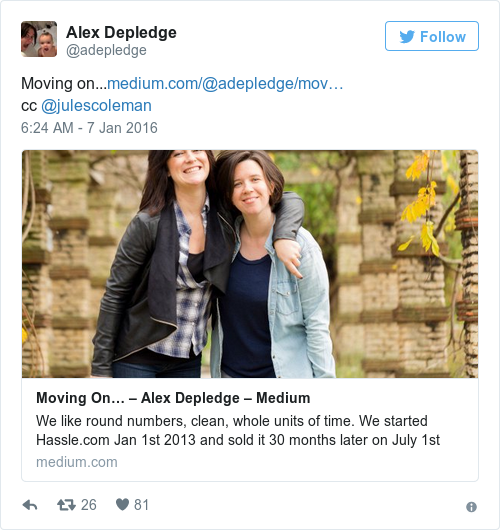 The decision to leave Hassle was a tough one to settle on. Eventually Coleman and her fellow co-founder Alex Depledge decided to leave the company. She said she doesn’t regret the decision.

“We certainly were not irreplaceable. We take that as a great compliment if the company goes on from strength to strength as we step back.

“If it all fell apart as we left, then you could probably say we hadn’t done a very good job.”

Coleman, who was raised in Kildare, has taken a self-imposed break after leaving Hassle and was coy about what her next venture might be, although she didn’t rule out starting another business with fellow co-founder Depledge.

However, she said despite all their experience, it’s actually a lack of “naivety” that could hold them back.

“We’ve lost a lot of naivety, which is something that I worry about. We know just how hard it is (to set up a company), which is not great.

“However, we understand how various different business models work, the challenges, the pitfalls, how to get your first customers and what momentum and traction actually feel like.”

Coleman said she also has a greater appreciation for how much luck matters when it comes to entrepreneurship.

“We worked hard and we had a good idea, but without luck falling in our favour a few times, the outcome could have been incredibly different for us.

“It can be a little difficult to think about starting again knowing that you have to do all that hard work, have a good idea, and you need to have luck come in and favour you at the right point in time.”

Despite being keen to start a new project with Depledge, Coleman said being a founder isn’t something she is addicted to.

She said there are a lot of benefits to starting your own company, but going back to a normal job as an employee isn’t off the cards either.

“If it was the right role, in the right company and I really believed it, I wouldn’t say it’s off the grid. I don’t need to be at the top table to feel like I am playing a part.”

READ: The founder who made his break texting Taiwanese suppliers at the back of class

READ: ‘The self-employed act as unpaid collectors for Revenue and their reward is higher taxes’