THE RESTORED STONE of Dublin Liberties Distillery wasn’t always home to whiskey. The building’s grey facade formerly housed a mill for grinding flour and a tannery that prepared animal hides over its 400-year history.

That’s not apparent when Fora walked through its doors to the whiff of malted barley last week. Behind the freshly painted walls of the cafe and shop are fermenters, copper distilling pots, and barrels of the brown stuff maturing.

Owned by global drinks company Quintessential Brands, the distillery is one of the newer entries on the Dublin scene.

Whiskey has been a major Irish success story in recent years, as the success of brands such as Jameson in the US and a boom of new distillers has revitalised the trade.

The industry got quite a shock a few weeks back when the World Trade Organisation gave the US the go-ahead to impose $7.5 billion worth of tariffs on EU products – including Irish whiskey.

However, whiskey faced being dragged into a global trade dispute that could have eaten into the industry’s margins in its most important export market at the stroke of a pen.
The fear was short-lived. It quickly emerged that the spirit was being excluded from the tariffs, but the close call did cause a stir.

Speaking over the phone to Fora last week, Cliodhna Barlow, the global brand director at Dublin Liberties Distillery, said the majority of exports from the facility head to the US market.

Despite the tariff scare, the company isn’t going to be changing its strategy anytime soon or its markets – but it will continue to monitor the situation.

“It hasn’t changed our strategy at all. It’s something that we’re we’re watching and we’re keeping an eye on we’re mindful of the situation,” Barlow said.

The distillery also exports to Eastern Europe, with Ukraine, Poland, Czech Republic and Russia all growing markets for the brand.

Barlow said the region was not without its challenges either. The volume of sales might be good but profitability not so much.

Preparing for the worst

For Bernard Walsh of Walsh Whiskey, the company was prepared for the worst with the trade tariffs.

“We were all nervous, very unsure (of) what would happen and I think it was also believed with Donald Trump at the helm, anything could happen,” he said.

He pointed out that the possibility of tariffs being placed on the spirit hasn’t gone away.

‘“It all depends on how the current negotiations with the UK and Europe, this could all be back on the table next year,” he said.

Nevertheless, Walsh highlighted that the US isn’t his business’s only market.

For Writers Tears and the Irishman, which are both produced by Walsh Whiskey, Russia is the second-largest market. The company first entered the country 15 years ago.

Dependence on the US

The US is Irish whiskey’s largest market, ahead of Ireland itself, with 4.5 million nine-litre cases sold into the country in 2018, according to Irish Whiskey Association (IWA) figures. That’s half of all the cases sold globally that year.

Some players are looking to new markets to diversify, while others aren’t prepared to turn their backs on the thirst of the US market.

William Lavelle, head of Irish Whiskey Association, told Fora the organisation is working with priority states like Pennsylvania and New York to help “mainstream Irish whiskey in the United States”.

Nevertheless, the association is advising members to target 50% of its sales growth outside the States, with the ongoing risks.

Lavelle warned there would “be no low hanging fruit” when it comes to entering new regions, and all growth would be hard, but the markets show potential.

“What we are seeing is companies taking a very strategic approach to identifying markets, investing in sales and marketing, putting boots on the ground … that will pay off,” he said.

Central and Eastern Europe are areas where the thirst for Irish whiskey is growing, as consumers turn away from traditional drinks such as schnapps and vodka.

John Cashman, brand ambassador for the outfit, told Fora it was the top Irish whiskey seller in Germany last year.

While he couldn’t give a figure on how many bottles of the distillery’s whiskey were exported there last year, he did say “a generational switch” is happening, with young people attracted to a drop of it. 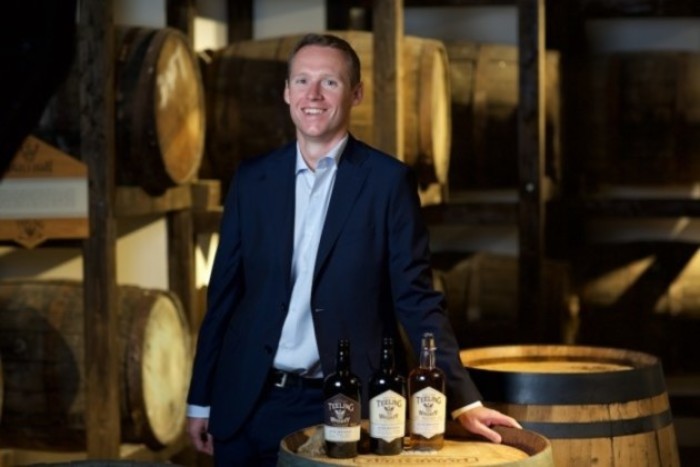 Roll with the punches

For Jack Teeling of the Teeling Whiskey Company, the plan is to control what’s possible and after that to “roll with the punches”.

He said the tariff scare has not made the company do anything differently and the US  remains its largest market.

“You can’t just turn around at the drop of a pin and decide you are going to change tack,” he said.

“The reality is the US is still going to be the largest market in the world for Irish whiskey. No matter what it’s not going to change. Irish whiskey isn’t going to fall off the edge of a cliff.”

Even if the tariffs do come into play, Teeling said it would “just put more pressure” on the company’s margins.

Though Teelings has been “seeding” in other international markets over the last five to six years, Teeling was quick to say “these things take a long time to develop”.

He said the reality for the Teeling brand and smaller companies is to “fish where people know their Irish whiskey”.