IRELAND HAS SPENT €1.8 million on legal costs over the past five months to fight the European Commission’s finding that Apple owes the state €13 billion in back taxes.

The Minister for Finance, Michael Noonan, today said it wasn’t possible to produce an estimate on how much the case would eventually cost as it may stretch on for four or more years. The figure stood at around €1 million in early October.

The minister was appearing before an Oireachtas committee, where he accused the commission of using “contradictory” arguments in the unprecedented illegal state-aid finding delivered in late August.

Ireland was found to have given the iPhone maker a selective advantage over a period of more than two decades that allowed it to pay effective tax rates as low as 0.005% on profits from sales in Europe and several other territories.

The case is focused on two Irish-registered companies, one of which was used as a “head office” despite having no staff and being effectively stateless for tax purposes. Ireland denies the profits assigned to the head office should have been taxed in the Republic.

The government has appealed the ruling, with Noonan today saying it was “very damaging” for the country’s reputation “to be called into question in this way”.

“The reaction to the Apple decision has, at times, painted an outdated and unfair caricature of Ireland’s position on tax that is at odds with the evidence and overlooks our proven track record in recent years,” he said.

“By appealing the decision, the government is taking the necessary course of action to vigorously defend the Irish position. Ireland has done nothing wrong here.” 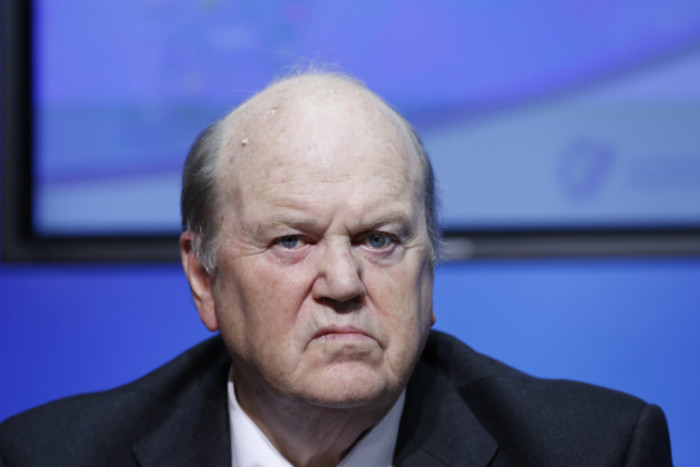 Not a target any more

However the finance minister appeared to abandon previous claims that the Apple case was an attack on Ireland’s much-publicised low corporate tax rate.

Noonan said a few days after the commission’s ruling that other EU countries were jealous of “how successful we have been in putting the headquarters of so many companies into Ireland”.

Today he suggested the case was politically motivated but added Ireland was “not particularly” being singled out by the commission – which he claimed was trying to “give an edge” to tax-reform moves being pushed by the OECD and others.

Nevertheless, he defended Revenue as having properly applied Irish tax laws in the Apple case.

“There was no attempt by the Irish authorities to open gaps or doors or anything for Apple, and we were very surprised that many years later there was a retrospective reach by the commission.”

Tax officials gave the tech giant two “rulings” – which give companies opinions on how they can legally allocate profits – which the European Commission claims had no basis in fact.

EU competition commission Margrethe Vestager earlier this week said it appeared “no questions were asked” in coming up with the arrangement that would determine Apple’s tax structure in relation to Ireland.

Noonan confirmed that, if Ireland lost its appeal to the European Court of Justice, the final sum due to Ireland could be more than the €13 billion – plus interest – flagged in the commission’s ruling.

The Apple tax bill will be left to Irish officials to decide if it loses the case, although other EU states may try to claim a slice as well. Vestager has said she expected the “vast majority” of the sum would still go to Ireland.