THE NUMBER OF working days that were lost as a result of industrial disputes in Ireland more than doubled last year, according to new figures.

Over 71,000 days were lost due to strike action last year based on figures released by the CSO. This compares to nearly 33,000 days lost during 2015.

Despite the increase in days lost due to strike action, there were fewer workers involved in industrial action during 2016.

Last year saw a number of high-profile industrial disputes in Dublin’s public transport sector, with Luas workers hitting the picket lines on a number of occasions over unmet pay demands.

The dispute spanned several months before it was eventually resolved in June when drivers voted to accept Labour Court recommendations of an 18.3% pay hike.

The settlement sparked unrest among Dublin Bus drivers who also went on strike as they sought pay increases over a number of years to bring them in line with Luas staff.

Figures from the CSO showed that disputes by companies in the transportation and storage sector made up over one fifth of the working days lost last year due to strike action.

The increase in working time lost due to strike action was significantly influenced by disputes in the education sector. Two disputes in this area accounted for over three-quarters of all days lost. 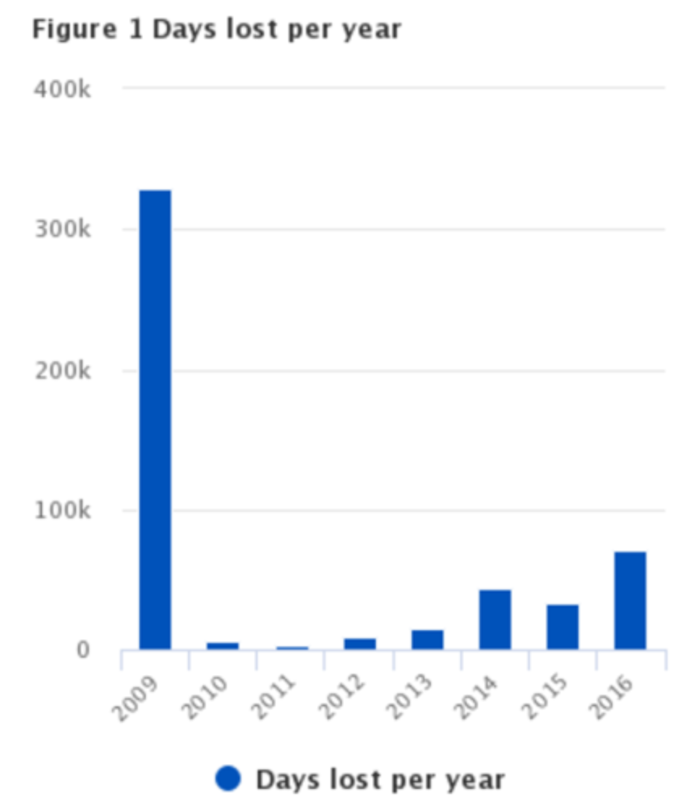 Last year, Minister for Public Expenditure Paschal Donohoe said the wage hikes for Luas and Dublin Bus workers could cause a “domino-like effect” of wage demands and strike action by workers.

In the aftermath of the Luas settlement, gardaí and teachers announced strike action plans.

In the end, Gardaí cancelled four days of planned strike action, however 500 secondary schools closed as a result of action by teachers’ group the ASTI.

This year, industrial action has continued to make the headlines. Drivers at Bus Eireann have announced plans to commence an  indefinite strike from Monday after the state-run company revealed it will implement cost cutting measures.

Meanwhile, Tesco workers at 16 stores hit the picket lines over a move by the company to shift long-serving staff to new contracts.