A HARD BREXIT would increase the cost of living for all Irish households by as much as 3.1% – or an increase of €1,360 for the average home, according to the country’s leading economic think tank.

In new research, the Economic and Social Research Institute (ESRI) predicted that relative costs would rise the most for lower-income households as they spent a larger greater share of their budgets on food products.

Many of these goods are imported from the UK and would be subject to tariffs in a hard-Brexit scenario, with the price of staples such as milk, cheese and eggs potentially rising by nearly 50%.

The study was commissioned by the Competition and Consumer Protection Commission (CCPC) and examines the shares of imported products from the UK in household spending and the effects of a hard Brexit on these products.

The increases in prices would come from a combination of import tariffs, assuming the UK doesn’t agree a comprehensive free-trade deal with the EU, and other higher costs of trade.

The EU and UK earlier this week agreed a draft Brexit deal that would maintain existing trade and regulatory arrangements until the end of 2020, however it’s not known what trade relationship will be put in place once the transition period expires.

Meanwhile, an EU assessment of the impact that Brexit would have on the bloc’s cities and regions found that Ireland would be easily the worst-affected.

The Republic’s two EU-classified regions faced similar exposure levels to some regions in the UK when it came to the trade fallout from Brexit. 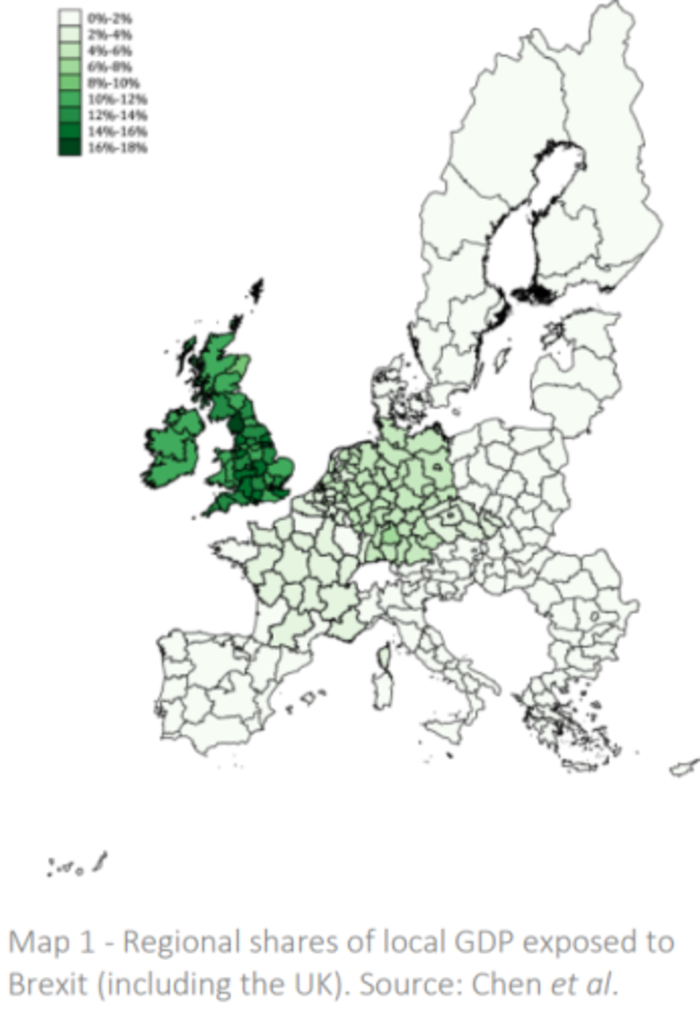 Source: European Committee of the Regions

Cost of milk and bread

The ESRI’s research used a number of Brexit scenarios to examine the price increase of a range of imported goods.

It found that if tariffs were introduced and other trade costs also increased following a hard Brexit, the price of bread and cereals could rise by up to 30%, while milk, cheese and eggs prices could increase by 46%.

Martina Lawless, one of the report’s authors, said: “As Ireland imports a considerable amount of food products from the UK, a hard Brexit could have an immediate impact on the cost of living.

“Unfortunately, we find that this impact would likely fall disproportionately on lower-income households.”

CCPC chair Isolde Goggin said: “The implications of the research highlight an important opportunity for domestic businesses, particularly the food industry, in the form of import substitution.”

The estimates do not take into account switching of products or changes in expenditure patterns in response to the cost increases. For this reason, the ESRI said they are likely to reflect the maximum possible increases in the cost of living.