BUILDERS NEED OVER €330,000 to construct a single house in the greater Dublin area, according to a major new study.

The report by the Society of Chartered Surveyors Ireland (SCSI) also found that the price of building the physical structure of the house came to just over €150,000, less than half of the overall cost of providing that home.

It evaluated the cost of building a three-bed, semi-detached house of 1,214sq ft, which is around the average size of new properties in Dublin.

According to the latest report from MyHome.ie, in the first quarter of the year the median asking price for a three-bed house across the Dublin county area was €285,000.

The SCSI argued that the gap between house prices and construction costs needs to be cut. Separate figures from Daft.ie showed the number of properties for sale across Ireland hit a nine-year low earlier this year.

The housing crisis has been cited as a major brake on further employment growth, particularly in Dublin, as prices drive workers out of major cities.

The society recommended several different measures to reduce the cost of manufacturing, including cutting VAT in the building sector from 13.5% to 9% and setting up a state-backed lender to make finance for the construction industry cheaper.

For the report, the SCSI took a poll of costs at eight different housing projects, each with a minimum of 30 units currently under construction, in the greater Dublin area during late 2015 and early 2016.

It found that construction costs averaged around €150,000 per house, while other ‘soft’ charges made up the €180,000 difference. The largest of these was the price of buying land, which the SCSI calculated at average of €57,500 per unit.

VAT represented 12% of the total cost while developers also needed to leave a margin of 11% in order to get their project off the ground. Borrowing, marketing, levies and professional fees made up the rest of the costs. 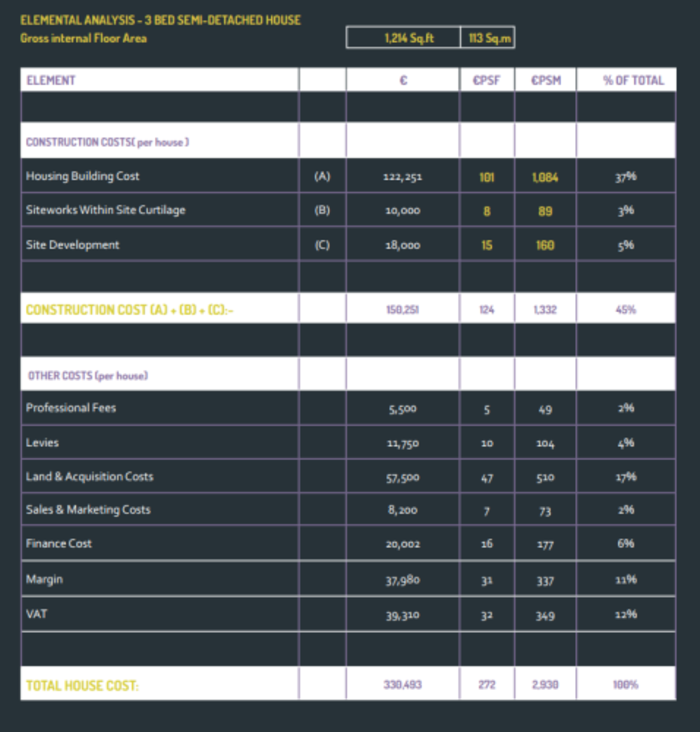 Speaking to Fora, Norman Higgins, a member of the SCSI and the commercial director of construction group Sisk, said the figure of €330,000 represented what a developer would need per house to start a project from scratch – without the benefit of existing resources such as land.

The projects surveyed had an average margin of just under €38,000 or 11% per house, which means that the basic cost per unit was just over €292,500 before any profit was accounted for. The margin was needed to cover elements like a risk allowance for the project and also to give the developer enough money to fund their next venture.

However, the SCSI added that most financiers are currently demanding a margin of at least 15%.

The organisation said that this was due to several factors including getting a better return on their equity, the potential for unforeseen issues to arise during building and the general risk of the construction industry.

“Before any financial institution will fund them, they need to demonstrate that they would be making in the region of 15%,” Higgins said.

“For a developer’s business to go forward (after one project), he still needs to buy his next site – and it doesn’t stack up.”

He said the surveyed sites had extenuating circumstances in “every single case”, which helped the developers to boost their margin and would not be available to new entrants into the market.

“For some of them, the development levy may have been paid when they bought (the site),” he said. “They may not have had to finance it or they may have had cash themselves.”

Cost of finance was also found to be very high with the SCSI claiming many developers were paying rates of 10% to get funded.

The organisation recommended introducing a blend of measures to cut the cost of new builds and get construction moving.

Two of the most eye-catching proposals were to cut VAT and reduce finance costs.

The SCSI said that policy makers should consider reducing VAT to 9%, adding “consideration should also be given to the zero rate applied (to new builds) in Northern Ireland and the UK”.

The organisation also said that state finance may be the “most feasible” way to reduce the cost of getting money for developers. It suggested establishing a development bank that could lend money at 5% rates thanks to the government’s current ability to borrow at negligible cost.

It said that this bank could be modelled on something like the old Agricultural Credit Corporation, which was set up by the government to provide lending to the agriculture sector and was sold to Rabobank in 2002.