Although Stephen Leddy is embarrassed when you bring it up, his LinkedIn profile touts the fact that he was “voted most popular male student by the female students” during his beach volleyball days in college.

“I need to update that,” he tells Fora. “It used to be a lot worse, I had all sorts of mad education stuff on LinkedIn. I need to take that side of things a bit more seriously.”

However, he insists that his “most popular” accolade was a real one.

“It was from a large circle of friends in Dublin Business School, where I went, some of my friends and my girlfriend,” he says with a laugh.

“Now you’re getting a flavour of what I’m like.”

While he trained as an accountant, Leddy doesn’t like the idea that he conforms with the stereotypical image of the boring number-cruncher.

“I’m not a grey suit-wearing accountant. It’s not in my DNA. I love the retail buzz.”

Leddy is the managing director of the Irish arm of Hidden Hearing, a firm which sells hearing aids through its retail outlets and clinics around the country.

The 47-year-old Dubliner took over as the company’s Irish financial controller in 2000. Until then, he had spent much of his working life in accountancy.

“My father and grandfather are accountants. I didn’t know what I wanted to do after school. I wasn’t pushed, but I was gently guided to the accountancy profession,” he says.

“I did it because it opens doors, I could travel with the qualification. It allowed me lots of different avenues after I qualified.”

Leddy worked in his father’s practise while studying but left after four years.

“I said I was going to give it a go myself. I didn’t want anyone to think I was getting a leg up or a silver spoon, I wanted to make it myself. And that’s what I did.”

He found a job with a new accountancy firm, where he worked for two years before being poached by a client.

“He offered me a position to run his company, which sold windows. He said he wanted to drive around Europe, and asked me, would I run the company for him? I said OK.” 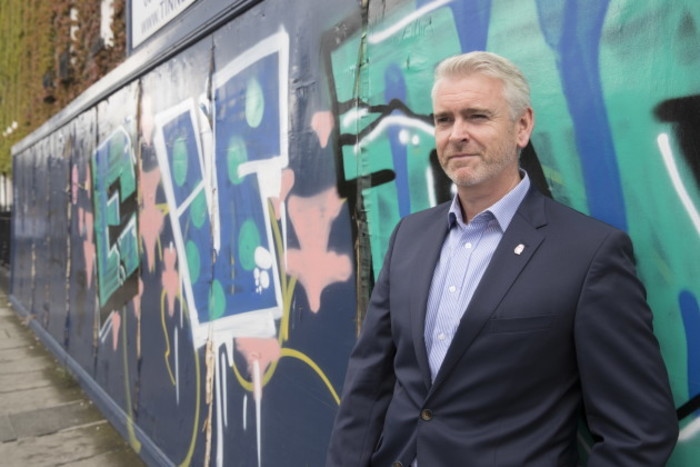 The business was small, with Leddy in charge of about a dozen people. However, he quickly got a taste for it.

In the 90s, Hidden Hearing had only a small presence in the Republic: a sole retail outpost in Cork, along with its delivery business.

That was about to change. The UK firm was taken over by a Danish company, which decided it wanted a bigger footprint here. Leddy was one of about 40 people hired to make this a reality.

“The first job was to sever all ties with the UK. It was exciting, like starting a new business,” he says.

However things started slowly, with the company struggling to gain new ground.

“I was given an opportunity to run the business. We were spending lots on marketing, and there was no analysis on the return on investment,” he says.

“We started a strategy of new shop location openings. In our first year we opened six shops in Galway, Limerick, Waterford and Dublin. Then every year we would open one or two stores.”

Things started to improve. The company, which had been losing €500,000 annually, broke even about 18 months after the changes were made. It performed well for years, and even came out well in the recession.

“Our target market is the over-60s, and they already have their money, so we still grew. We were actually more profitable as we were negotiating leases at a fraction of the prices of the boom. The market was brilliant.”

Then, disaster: Hidden Hearing fell foul of Joe Duffy. In 2010 a woman rang up RTÉ’s popular Liveline radio show to complain that she had spent thousands on the company’s hearing aids but they didn’t work.

The complaint, while seemingly a fairly mundane one, had a devastating effect. “Joe Duffy has about 300,000 or 400,000 listeners who are our target demographic. We saw appointments falling out of the diary straight away. We lost €1 million worth of business because of it,” Leddy says.

“I still have nightmares about it. It was probably the one thing in my adult life that shook me to the core, because all the good things we did were overshadowed by this one episode.”

Leddy alleges that not all of her complaints were accurate; regardless, the result was a dramatic re-think of the company’s business.

It launched several new initiatives to give it a more customer-friendly image: for example, extending the warranty on its hearing aids and providing customers with free batteries for the devices.

“We had to regain trust, and we shook up the market. Many of our competitors took the best bits. The complaint was a gift: it was good for customers, who got a better service,” he says.

Hidden Hearing’s Irish arm now employs about 150 people in 75 clinics across the island of Ireland and is “extremely profitable”, according to Leddy, although the company doesn’t break out financial figures for the country in its official accounts.

It has a mix of retail outlets and smaller clinics throughout Ireland. Many of the clinics are in more sparsely populated areas, and are only open part-time.

The firm offers a range of services at its outlets, such as hearing tests and ear wax removal. It makes almost all of its money from selling hearing aids.

A problem for the business is that most of its customers don’t want to buy a hearing aid, which has led to Hidden Hearing re-jigging its approach.

“We’re selling a product that no-one wants, it’s like a grudge purchase,” Leddy says. “In 2014 we changed direction. We were a sales company driven by KPIs (key performance indicators). We had KPIs coming out the wazoo.

“We introduced a new concept that is about helping people to hear better and developed a wellness programme for customers.”

The company’s hearing aids cost “anything from €300 to €2,800” depending on the technology. 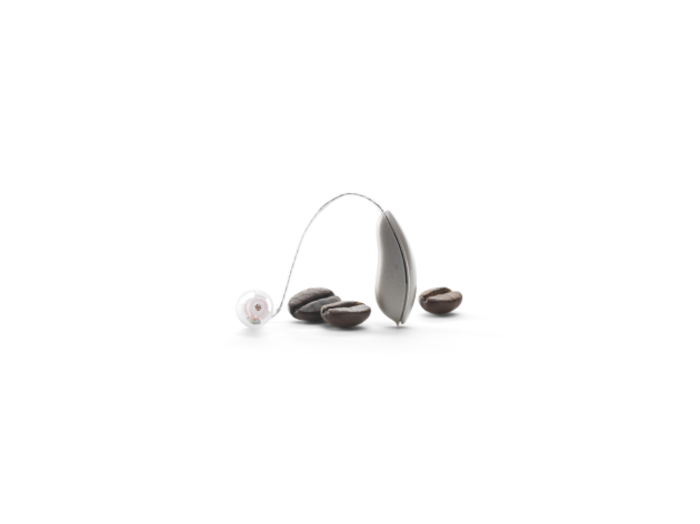 A hearing aid sold by the firm. Next to coffee beans for scale.
Source: Hidden Hearing

Someone who just misses a few words when watching television may just need a simple directional mic, whereas someone with worse hearing who’s still working may need a device with more advanced technology.

The average age of Hidden Hearing’s customers used to be 76, now it’s dropped to the over-60s as the company targets any and all who have been affected by hearing loss.

The firm has a fairly even spread of outlets throughout the country.

“We follow the population and demographics of the over-60s. Where the demand is greater we have more clinic days or more clinics. That’s it, there’s no rocket science to it,” Leddy says.

The hearing aid market is fairly fragmented, but one rival stands head and shoulders above the rest: Specsavers.

Leddy claims that Hidden Hearing is more focused on care, whereas the franchise-based Specsavers tends to look at volume of sales.

“Every single person you meet in a Hidden Hearing is a company employee, and I’m the figurehead. There’s joined-up thinking. If you go to Dublin or Donegal you get the same experience.”

Hidden Hearing will continue to grow and open new outlets. However, Leddy says that the biggest development coming down the tracks is a fundamental redesign of the firm’s brand.

“Lucozade used to be about when you were sick, then they changed that concept from sickness to vitality,” he says.

“We want to change the status quo and target people who don’t think they have hearing loss, who think it’s something to do with old people. We want the image (of hearing aids) to go from old and sick to young and sociable.

Leddy wants to oversee a company that is expanding on that scale. While it might disappoint his father, there will be no return to accounting.

“It’s very rewarding as you can see yourself changing lives. Ireland has one of the lowest penetrations of hearing aids in Europe. I want to break down barriers in the industry before I leave it.”