JUST OVER A year after launching the first direct flights between Ireland and mainland China, Hainan Airlines is axing its Dublin to Shenzhen service and putting its flights to Beijing on ice until 2020.

The Chinese airline is no longer taking bookings for its Dublin-Shenzhen service after 26 August and its route connecting the Irish capital with Beijing is closed for reservations after the first week of October, according to data provided to Fora by flight analytics firm OAG.

Fora has contacted Hainan Airlines for comment but did not receive a response at the time of publication.

A spokesman for Dublin Airport said it is disappointed that Hainan had decided to suspend the Beijing service for the winter and end its flights to Shenzhen, but understood that the decision was part of a wider programme of capacity reductions.

It is understood that the departing direct Beijing flight from Dublin was more than 80% full for the past three months.

The move comes just days after Ireland was named ‘most promising overseas destination’ at a summit of travel influencers organised by Sina Weibo, the Chinese equivalent of Twitter.

Tourism Ireland chief executive Niall Gibbons told Fora that Hainan’s decision to suspend the Dublin-Beijing flight until 2020 and to cancel the Shenzhen service is “very regrettable”.

“As an island destination, direct, convenient and competitive access services are critical to achieving growth in inbound tourism,” he said.

Gibbons said Tourism Ireland will continue to “promote the island of Ireland vigorously in China” by highlighting Cathay Pacific’s direct service from Dublin to Hong Kong, where all flights were cancelled today after thousands of pro-democracy protesters flooded the city’s airport.

The State-backed marketing agency is hosting a group of senior managers from Chinese online travel giant Ctrip later this week.

Spending by Chinese travellers was down 10% in the first quarter, according to recent reports, with some pundits blaming the drop-off on China’s slowing economic growth, weakened currency and trade war with the US. 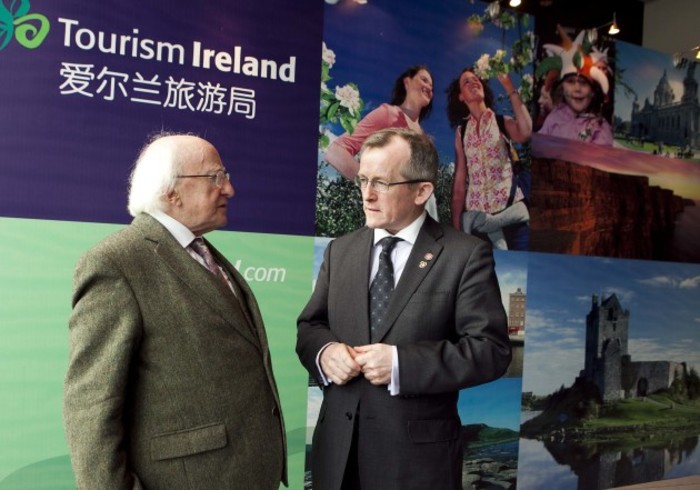 Hainan started flying between the Irish and Chinese capitals in June 2018, with some services travelling via Edinburgh. In February of this year, Hainan launched a twice-weekly, non-stop service from Dublin to Chinese hi-tech hub Shenzhen.

In an unusual move for a long-haul operator, the Dublin-Shenzhen route was announced just a few weeks before the inaugural flight. Carriers tend to announce and promote new long-haul routes several months before taking to the skies.

Following the arrival of Hainan Airlines on these shores, one official at Fáilte Ireland – which has encouraged businesses to embrace the arrival of wealthy Chinese tourists – likened the launch of direct air services to the region to “Ireland in the 1970s when we started selling Killarney to the States”.

According to Tourism Ireland, some 100,000 Chinese tourists visited the country in 2018. Although this was a 35% increase on 2017′s tally, that represents less than 1% of total international visitors to these shores.

Hainan Airlines was established in 1993 and carried more than 79 million passengers in 2018, making it China’s fourth biggest airline by passenger numbers. It is part of the HNA Group, which owns Dublin-based aircraft leasing firm Avolon.