A SPECIALISED GARDA unit that examines false personal injury claims is among the measures being suggested to tackle high insurance costs, which business owners say are putting them under pressure.

Minister for Justice Charlie Flanagan flagged the possibility of the unit, which would be funded by insurers, at the Insurance Ireland annual fraud conference in October 2017.

The Department of Finance has published the ‘Cost of Employer and Public Liability Insurance‘ report today, which addresses concerns that the cost of insurance and injury claims have “brought the short-term survival of businesses into question”.

Business owners have expressed “frustration with the inconsistency of personal injury award levels, including the view that insurance companies can settle questionable claims too quickly” and that there is a “perception that fraud and exaggerated claims have been increasing in recent years” with “no consequence or risk to taking such a claim”.

The report found that after comparing state agency claims with guidelines in the UK, a cap should be placed on certain claims.

It also said that there would be “substantial merit” in examining legislating for a cap to the damages a court may award in personal injury cases. It said that further reports were needed to ascertain at what point the cap could be introduced.

Below is an example of some of those payouts, compared in the right hand column of UK guidelines on payouts. 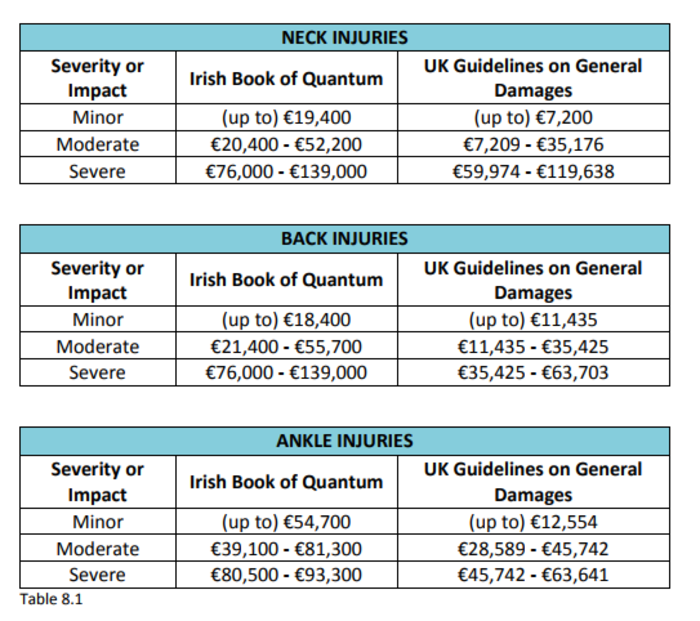 Insurance Ireland said that the report “confirms that our award levels are high relative to the UK”.

The report added that any assessment of a cap “must also consider the rights of injured persons to seek appropriate compensation for those injuries through the justice system”.

Among the several recommendations and actions from the report, the Department of Justice and Equality is to consult with An Garda Síochána to produce relevant statistics on complaints and investigations relating to fraudulent personal injuries claims.

It’s estimated that the insurance industry spent between €14 million and €17 million every year since 2011 in tackling insurance fraud. The insurance sector also estimated that it costs them in the region of €200 million a year, which they claim adds an approximate €50 to each policy.

The report has said that one of the main problems with false injury claims is that it can be viewed as a “victimless crime”.

“There are some people who believe that, in the overall scheme of things, the making of a false claim or the exaggeration of a genuine claim can be viewed as harmless or insignificant,” it said.

“However, this view takes no account of the fact that the cumulative impact of those false or exaggerated claims affects all policyholders through increased premiums.”

It also said that plans were underway to set up a “dedicated insurance fraud unit within An Garda Síochána” that would be funded by insurers.

Added to the problem of false injury claims is the relatively low rate of perjury in Ireland.

According to Central Statistics Office data, the average number of recorded perjury offences over the past 10 years is 3.3 per year, with none being recorded in 2016.

Figures of rates of perjury in England and Wales appear to be significantly higher, with 83 proceedings brought to court in 2008, with 82 found guilty. 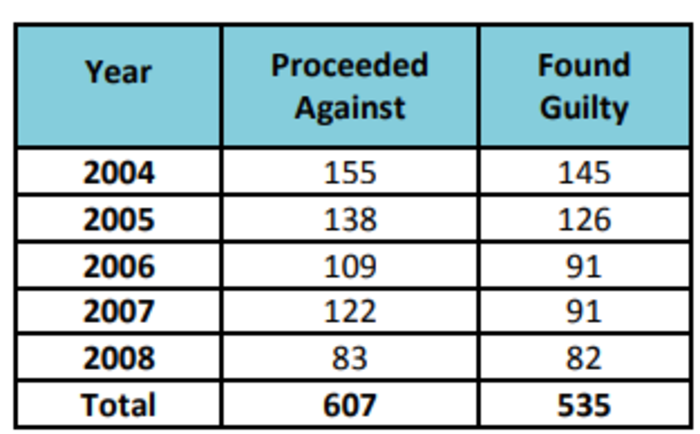 But the working group also identified a number of gaps in their information that would better able them to suggest solutions for businesses struggling with high insurance costs.

These included the cost of insurance to businesses, the trends in public or employer liability claims, and the legal costs and damages awarded in relation to courts cases.