THE DUO WHO founded Fulfil protein bars will launch a series of products in collaboration with other well-known food firms under their new healthy eating brand Cali Cali.

Tom Gannon and Niall McGrath, who exited the company behind the popular nutrition bars last year, have rolled out a range of sauces and crisps under the Cali Cali moniker, which is inspired by Californian food and was co-founded with celebrity chef Donal Skehan.

Speaking to Fora, Gannon and McGrath said they plan to launch a suite of co-branded products with other food companies such as meat producer Kepak, poultry firm Manor Farm and frozen vegetables outfit Strong Roots.

Cali Cali intends to incorporate its healthy sauces and seasoning – created through Kerry Group’s food ingredients division – into a range of products such as beef jerky, chicken wings and sweet potato fries.

“We’ve created a brand world. That brand world lives in a California street-food market. If the product would naturally fit into that setting, then we’d look at (launching) it underneath this brand,” Gannon said. 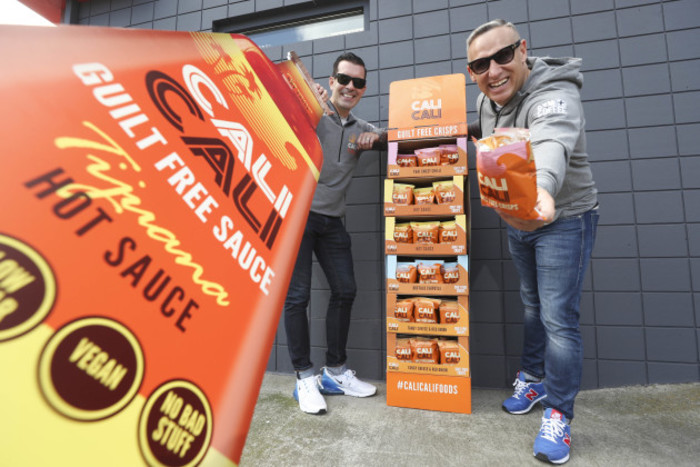 Cali Cali’s crisps and sauces are pitched as a healthier version of existing products. It doesn’t use preservatives or MSG (monosodium glutamate), and it doesn’t deep fat fry the crisps, which are made from a base product consisting of chickpea flour, rice flour and various beans.

The range has secured full distribution from service stations Circle K and Applegreen. It is also stocked in Dunnes Stores, SuperValu and by BWG supermarkets. It will soon roll out in Tesco stores.

The pair said they plan to launch the brand into other European markets over the next 12 months with assistance from Enterprise Ireland. They also hope to roll out in the UK once the outcome of Brexit is clearer.

Gannon said Cali Cali intends to bring “incremental value” to its stockists through display units, in-store sampling and large-scale social media campaigns, an offer that has so far been well-received by the retail trade.

McGrath added that there is “a lot of appetite for the product”.

“We’re trying to bring incremental sales rather than steal sales. We believe there’s a crisp consumer out there who has reduced the amount of crisps they’e buying because of health concerns … We can give you the product you know and love without the guilt,” he said.

Some €500,000 has so far been invested in Cali Cali and the company intends to seek further investment to fuel exports.