PEOPLE ARE LIKELY to make costly mistakes when over-complicated product descriptions force them to think about too many things at once, a new study has found.

The ESRI research showed people struggled to identify good-value deals once they were forced to grapple with two or more factors, regardless of their educational backgrounds.

The findings are the first to emerge from the ESRI’s Price Lab, which was set up to conduct experiments on what Irish consumers are capable of understanding.

For the study, the lab conducted 10 separate experiments that each tested a different aspect of consumer behaviour. The number of people who participated in these experiments varied between two dozen and more than 60.

The experiments all varied. One consisted of participants being asked the value of a ‘golden egg’. People were shown eggs of a certain size and ‘texture’ that equated to a certain value, and then had to guess how much different eggs were worth based on previous examples. 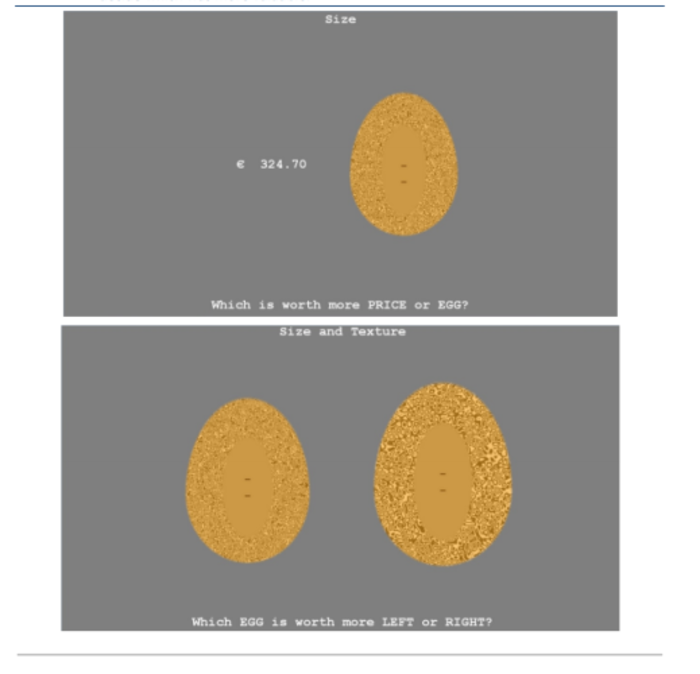 One of the experiments for participants in the study
Source: ESRI

Researchers found that participants were able to figure out single-attribute differences relatively well, such as if one egg was bigger than another.

However, they found it much more difficult when price was introduced to the mix and they had to identify how much different-sized eggs were worth.

The ESRI said that the findings imply that consumers “are likely to struggle to choose well in markets with products consisting of multiple important attributes that must all be factored in when making a choice”.

The report said that people with “high levels of numeracy and educational attainment” performed slightly better than those without, but added that the improvement “was small”.

“Even the best performers could not integrate all of the product information efficiently – they became substantially more likely to make mistakes.

“We also found that both the high level of imprecision and systematic bias were not reduced substantially by giving people substantial practice and opportunities to learn – any improvements were slow and incremental.”

The findings suggest that consumers can benefit if product ranges and descriptions are kept simple.

However when companies market products in an unnecessarily complex fashion, with multiple characteristics and price components, consumers will be more likely to make mistakes.

The think-tank said that a range of measures, like price comparison websites or standardised product information, could be used to help consumers make better choices.