EIR’S PLAN TO convert an abandoned-looking telephone exchange in Dublin city centre into a slick office space has been put on ice after city officials voiced concerns over a “visually intrusive” rooftop mast.

The mobile network provider is applying to change the use of the so-called Hely Building at Dame Court from a telephone exchange to a modern office space, complete with an LED art display at the ground-floor level, which would be installed for security purposes.

The 2,321 sq m space is spread across six storeys facing onto Dame Court, which is a stone’s throw from Grafton Street and Dame Street. There is also a car park at the rear, backing onto St Andrew’s Lane.

According to planning documents, the most identifiable feature of the existing structure is a “large telecommunications mast on its roof which is visible from many locations in Dublin city”.

The Hely Building dates back to the 1960s and was built when Eir was part of the then-Department of Posts and Services under a different guise.

Since telecommunications technology has advanced substantially over the decades, Eir only needs to retain the basement, a portion of the ground floor and the 40 m rooftop mast for the purposes of exchange services, while the rest of the building will be revamped for modern usage.

According to the application, the structure has endured wear and tear over the years and has “the appearance of being vacant”.

For that reason, Eir hopes to carry out “significant works of refurbishment” to create a more attractive building. 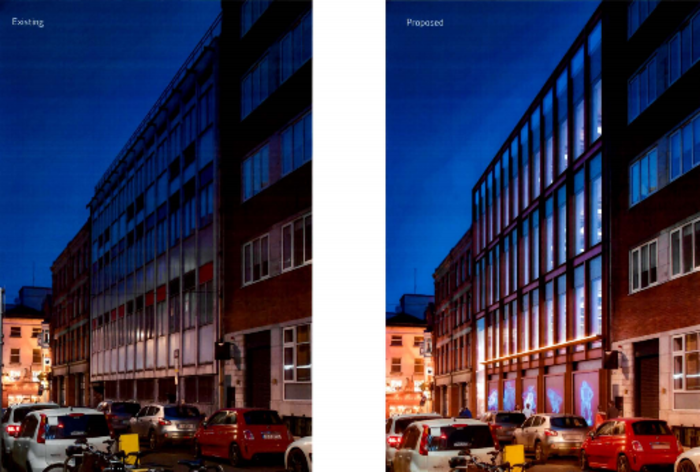 It plans to remove internal partitions throughout the building and install new staffing facilities like showers and changing rooms, a cafeteria and “breakout spaces”.

The new-look Hely Building will also replace the existing “primitive” entrance facade with a lightweight glass and metal one.

The ground floor is home to a telecommunications exchange, which is “critical infrastructure that cannot be relocated”, and it can’t have street-facing windows for security reasons.

22.04.2017'Ineffective, too slow and understaffed' - Irish telcos are rounding on their regulator

In order to “provide animation at street level”, Eir proposed installing five large LED screens that could display static or moving images ”of a cultural/tourism or artistic nature”, similar to Julian Opie’s famous artwork of a moving pedestrian outside the Hugh Lane Gallery.

However, Dublin City Council, which was due to make a decision on the planning application this week, has pressed pause on the project for now and requested additional information on Eir’s proposal.

City officials stated that Eir had not provided enough information on why the ground floor area cannot be used for retail or cafe purposes to “enhance the vitality” of the location.

It has also requested that the telco consider replacing the rooftop mast “having regard to evolving technology that is less visually intrusive”.

In a observation to the council, environmental and building heritage group An Taisce stated that the “rooftop mast erected on the building circa 35 years ago needs to be addressed”.

“The presence of this very large-scale box-structure mast in the heart of the historic city centre, close to buildings and areas of high architectural sensitivity, is not sustainable in the long-term,” the group stated.

An Taisce told Dublin council that Eir should be “requested to address the future of the large mast and should be invited to submit a timetable for its phasing out and removal”.