OVER A DOZEN of the biggest companies in the country paid an effective tax rate of less than 1% in 2015.

However, it was found that overall the effective tax rate for all sectors that year was close to 10% – not far off the country’s headline rate.

That’s according to a new report from the state’s spending watchdog, the Comptroller and Auditor General (C&AG). As part of its ‘report on the account of the public services’, it examined Ireland’s corporate tax receipts.

It found that 13 of the top 100 companies with the highest taxable income had an effective rate of less than 1% in 2015. Among this cohort, eight had an effective tax rate of 0% on qualifying income.

The report said that these low tax rates were likely due to “significant tax credits and reliefs”. Companies are able to legally slice their tax rates with allowances for research and development, and other schemes.

The top 100 businesses were ranked by ranked by taxable income and by tax due. Tax due is determined based on taxable profits.

Taxable income highlights companies “with the highest taxable income in a given year but which do not necessarily have the highest corresponding tax liabilities, depending on tax credits and reliefs availed of”.

“In 2015, the top 100 companies, ranked by taxable income, had a lower average effective corporation tax rate (9.3%) than the rate applying to all companies of 9.8%. 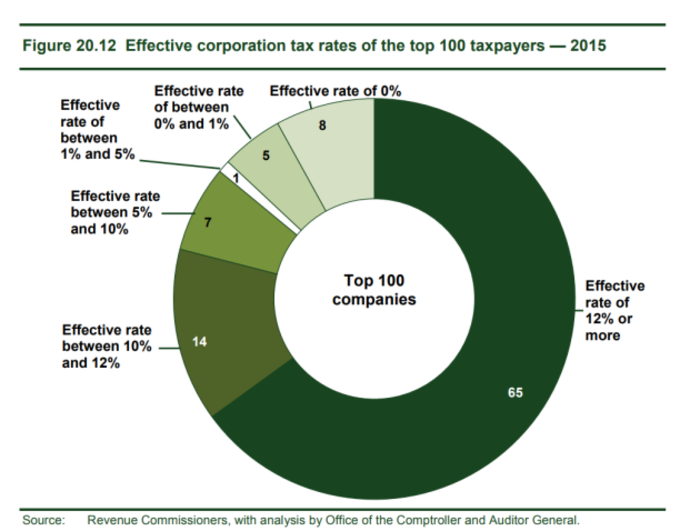 “This reflects the use of significant tax credits and reliefs, in particular double taxation relief and research and development tax credits.”

Overall, the report noted that in 2015 “Ireland had the lowest statutory rate of corporation tax of all OECD countries”.

It added that, based on the PwC/World Bank report, “Ireland’s estimated effective rate of corporation tax was 12.4%, which was just 0.1% below the statutory rate”.