DUBLIN COULD OVERTAKE London as Europe’s to locations for financial services companies once the UK goes through its Brexit manoeuvers.

A new report from PwC rated London as the most attractive city for financial services companies to set up operations in Europe at present.

Dublin ranked second in the survey, up from third place the year before, moving ahead of Luxembourg.

The research, which evaluated nine of Europe’s main financial centres, put Paris in fourth place, while Vienna rounded out the top five.

The study evaluated each city in six main areas, including the ease of doing business and the number of workers with a third-level education.

PwC said that the it was important to note that there were several areas not examined, “such as the appeal of different cities and regions as a place to live, which also contribute to the attractiveness of a financial centre”.

London was found to score well in five of the six indicators examined, scoring below average only for its ‘financial market infrastructure’.

Dublin ranked above average for two-thirds of the areas scrutinised, also falling down slightly on its market infrastructure and the share of credit available to the private sector as a percentage of GDP.

However, the study concluded that, all else being equal, “the loss of passporting in the UK post Brexit could see London lose its place as the EU’s strongest financial centre with Dublin rising to the top spot in the league”.

Free movement of people and services across member states is one of the rights guaranteed to EU countries. However, the UK’s vote to leave the EU now puts this ‘passporting’ arrangement, which allowed financial services in London to trade freely with other cities in the EU, in doubt.

PwC said that at the moment “it appears that the only way for London to continue to benefit from passporting would be for the UK to join the European Economic Area when it leaves the EU”.

“But given that this scenario would probably mean free movement of labour continuing to apply, the UK making a contribution to the EU budget and EU-wide regulations still having to be applied in the UK, this could be a difficult outcome to achieve politically.”

“We are already seeing some UK financial services organisations making enquiries on relocating to Ireland and only time will tell how this will develop,” he said. 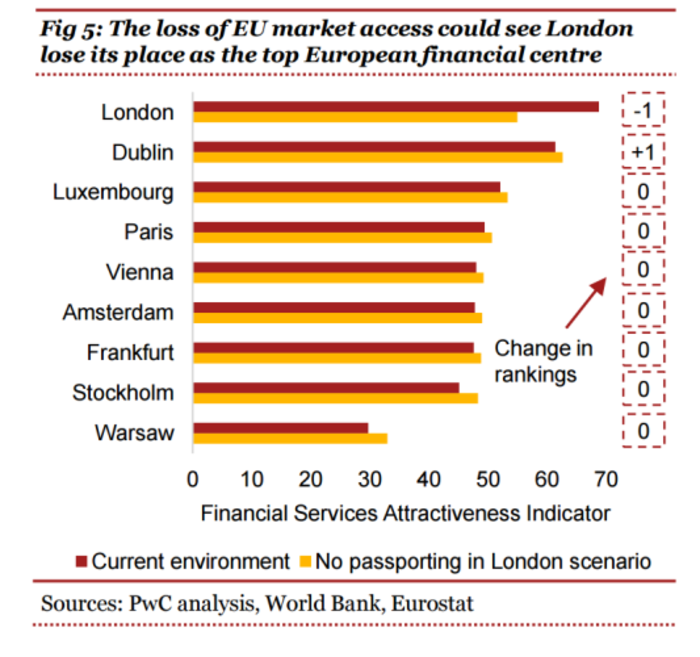 While a potential windfall of financial-services jobs for Ireland has been predicted as one, positive outcome of the Brexit vote, there remain doubts over how well-equipped Dublin is to cope with an influx of workers.

Despite the possible financial services gains, the report also warned that Ireland is the most exposed EU country to Brexit from a trade perspective.

The study noted that, as a percentage of its GDP, Ireland exports more to the UK than any other European country.

PwC Ireland ‘Brexit leader’ David McGee said that businesses in all sectors “need to put the case to government as to the impact of Brexit on their businesses”.

“While initial contact by our Irish government has already been made with some of our EU counterparts, this process must continue to ensure the best possible outcome for Ireland can be achieved. But there is a long road ahead,” he said.

The Central Bank recently cut its economic growth forecasts for Ireland, adding that the Brexit vote would have a “negative and material” impact on the Republic.