THE AVERAGE RENT for properties across Ireland has hit a new record high, according to the latest Daft quarterly report.

According to the property website’s ‘Rental Price Report’, average rents for properties listed on its website rose nationwide by an average of 11.5% in the year to the end of March.

The average monthly rent across the country at the end of the 12-month period studied was €1,261.

This marks a monthly increase of €232 compared to a previous peak a decade ago in 2008.

Rents are still by far at their highest in Dublin, with the average rents in the capital at €1,875 in March – a 12.4% increase year-on-year.

The Daft quarterly report found that in April there were 3,086 properties available to rent across the country.

The property website stated that this is the lowest number of properties available at this time of year since it started recording in 2006.

In Dublin, there were 1,265 homes available to rent. 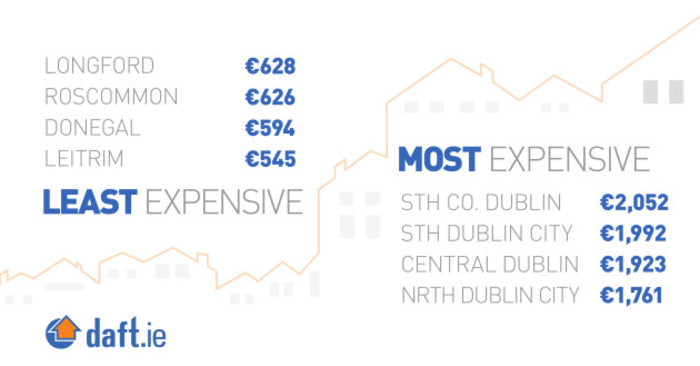 “Rents have now been rising almost three times as long as they fell in the crash and the increases show no signs of moderating,” said economist and author of the report Ronan Lyons.

“It is clear that, for those who have to look for a new home in the open market, rental inflation remains well above any reasonable measure of health,” he said.

“But as ever, rents are only the symptom. The cause remains a chronic and worsening lack of rental supply.

“Policy must focus on dramatically increasing the construction of urban apartments over the coming years, in order to meet both the backlog of demand and the country’s needs over coming years and decades,” Lyons said.

You can view the full report here

Written by Cormac Fitzgerald and posted on TheJournal.ie