THE VACANCY RATE across Ireland’s commercial property was up slightly in the second quarter of the year, with the highest vacancy observed in the west.

According to the GeoView Commercial Vacancy Rates Report, produced by EY-DKM Economic Advisory on behalf of GeoDirectory, the national vacancy rate increased by 0.2 percentage points to 13.3% for April, May and June.

The report shows that the east-west divide in commercial activity is widening and not closing, according to Dara Keogh, the chief executive of GeoDirectory.

“The five Connacht counties recorded vacancy rates considerably higher than the national average, with increases in every county except Galway. 18 counties in Ireland recorded an increase in commercial vacancy rates, as economic activity is increasingly centred around the Greater Dublin Area,” he said.

Connacht had the highest commercial vacancy rates: Sligo is the county with the highest at 18.9%, followed by Leitrim at 16.7% and Roscommon at 16.3%.

“Our analysis shows that almost 50% of all commercial units in the country are located in Leinster, with just over 20% located in the provinces of Connacht and Ulster combined. This is worrying, considering that most of these counties have also recorded higher than average commercial vacancy rates,” Annette Hughes, a director at EY-DKM Economic Advisory, said.

“With a high proportion of counties on the west coast relying on the accommodation and food services sector, commercial activity in these counties could be vulnerable to the impact of Brexit, particularly as a result of currency volatility and reduced tourism,” she added. 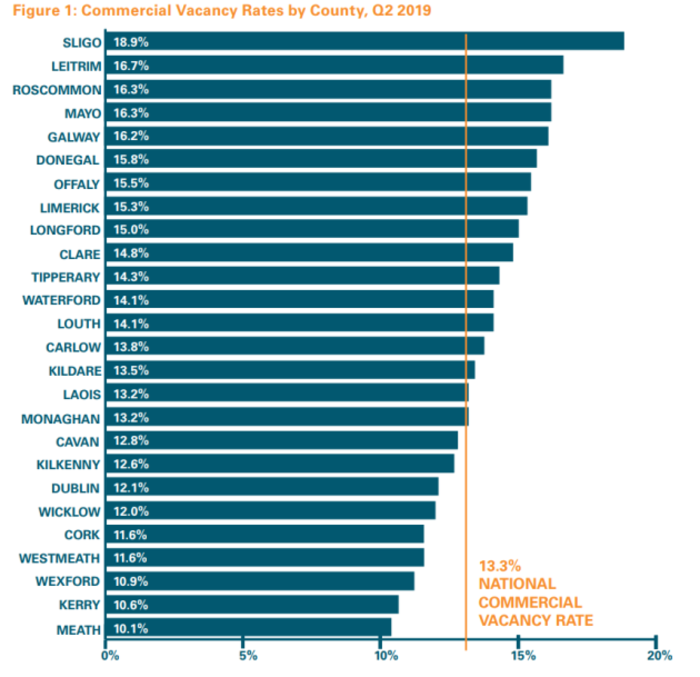 The report stated that the marginal increase in the national vacancy rate is “surprising”,  while having the vacancy rate in double digits in an almost fully employed economy suggests that the scope to reduce it further may be limited.

“Of more concern are the regional disparities which appear to be persistent from year to year, with many counties and towns along the west coast recording relatively high vacancy rates, and some are up on the corresponding rates in Q2 2018,”  the report stated.

“This signals the scale of the challenge to deliver the more balanced regional development projected under Project Ireland 2040.”

An analysis of 80 towns across the country found that of the 15 towns with the highest vacancy rates in Ireland, most were along the west or north-west of Ireland and in the midlands.

Edenderry in Co Offaly recorded the highest commercial vacancy rate in Ireland with a rate of 28.8%, following a year‑on‑year increase of 3.1 percentage points.

Of the 15 towns with the highest vacancy rates in the State, six were based in Leinster, four were based in Connacht, the in Munster and two in Ulster.

Greystones in Co Wicklow had the lowest vacancy rate in the State at 5.8%. In Dublin  vacancy rates were down in 11 districts relative to the same period last year.