COIN EXCHANGE OUTFIT Coindrum is looking to make a splash in the high street after securing a place on a retail tech accelerator facilitated by one of Google’s early backers.

The company was recently selected for the latest Retailtech Hub programme in Munich, which is facilitated by German electronics retail giant MediaMarktSaturn and Plug and Play, an early-stage investor that backed companies such as Google, PayPal and Dropbox.

Coindrum initially rolled out machines in airports throughout Europe and the Middle East that allow travellers to dispose of unwanted coins in exchange for duty-free vouchers worth 10% more than the cash value.

However, the company has since tweaked its model after developing a machine for high street retailers to provide similar coins exchange services, which have already been trialed in partnership with SuperValu.

Lukas Decker, the chief executive and founder of Coindrum, told Fora that the shift in focus was mainly prompted by a demand from customers.

“We put our machine in with SuperValu in the high street. We just basically dropped it in cold without promotion and it just took off,” he said.

He described the high street version of Coindrum as something that “looks like it belongs in an Apple Store”, noting that it features a 42-inch screen that will be used for digital advertising to create a new revenue stream for the company.

Decker said users of Coindrum in airports typically exchange between €5 and €6 worth of coins and spend on average 10 times that amount in duty-free stores.

In supermarkets, it’s predicted the service will be used to exchange much larger amounts of money which can be converted into vouchers or cash. 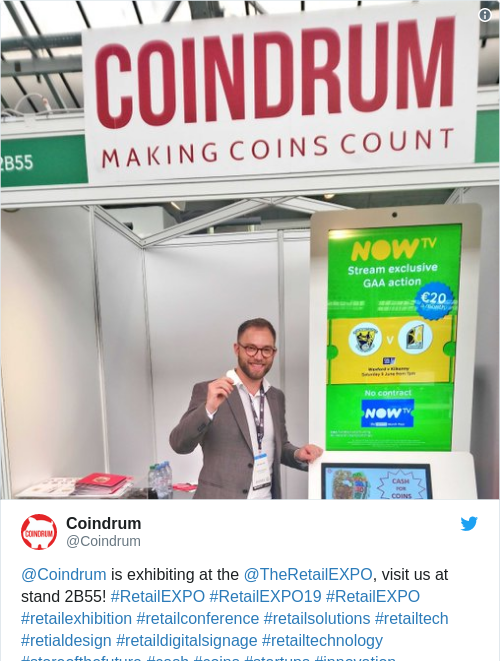 Coindrum is promoted to retailers as a method of locking in sales, driving footfall and potentially saving costs on replenishing coins stock.

“Depending on retailer preference, they can take the coins out of the machine and recycle them into their tills instead of buying in their coins from cash in transit companies,” Decker said.

Decker is now hoping to showcase the new technology to some of Germany’s biggest retailers after Coindrum was selected for the latest Retailtech Hub programme in Munich.

It is one of 12 outfits chosen to participate in the programme and will have access to key executives at the likes of Schwarz Gruppe, the group that owns German supermarket chains Lidl and Kaufland, and Visa.

“The idea is that (Retailtech Hub) partner with the big corporates in the German retail landscape and curate the innovative startup landscape for them. Corporates cut through the noise and get presented with (businesses) that have a working product that can be trialled,” Decker said of the programme.

“It is very much focused on actually trialling things and by the end of the programme seeing if (the startup’s technology) is something they want to scale or not.”

One of the attractions of Retailtech Hub is that there is no equity required from participants.

“What we’re most keen about is that you get to speak to the decision makers in the key retail players. They all sit around the table and you have their ear for the day, and they give you mentoring and pitch training.”

Decker – who is originally from Hamburg – said Coindrum is focused on developing a strong foothold in Germany, where cash is still widely used.

“This is the nation of almost 100,000 ATMs but not a single coin machine in sight. It has a very cash-reliant culture. All these notes produce coins and there’s nowhere to put them,” he said.

Decker said the company is not currently looking to raise any more funding and is instead focused on generating more business on the high street.