ONE OF TEMPLE Bar’s best-known hotels could have been “one of the most extraordinary spaces in Europe” if a major redevelopment had gone ahead.

That’s according to Andy Bow, a senior partner at UK architects Foster + Partners. Bow is one of the UK’s most prominent architects, and has worked on a slew of high-profile projects such as the redesign of Trafalgar Square.

“This was a project that was interesting and would contribute to the life of Temple Bar. This idea could have been one of the most extraordinary spaces in Europe,” he told the annual Property Industry Ireland conference.

Bow was one of the architects who worked on plans to expand Temple Bar’s Clarence Hotel during the boom.

In 2008, plans were put forward to dramatically redevelop the hotel, which is owned by U2 stars Bono and The Edge alongside developer Paddy McKillen.

It was proposed that the building would be gutted, with only its historic exterior retained.

It was intended that several surrounding buildings would be purchased that would allow the hotel to expand in size from 49 rooms to 149 rooms.

The larger hotel would have been centred around a dramatic atrium and a ‘flying saucer-style’ roof, called ‘the skycatcher’. The whole project was expected to cost €150 million. 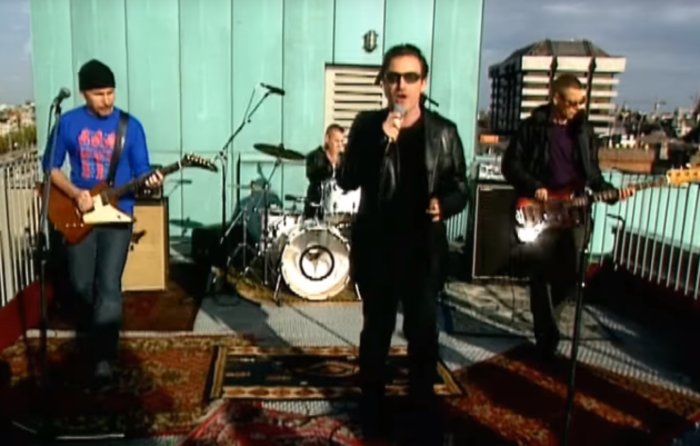 U2 on the Clarence Hotel roof
Source: SHAYMCN5/Yotube

There was fierce opposition from many locals and conservationists, as many of the buildings that would have been part of the development were protected structures.

While the project got planning permission, it was shelved during the recession.

Bow said that while he doesn’t usually talk about past projects “because you just cry into your whiskey when you do”, he wanted to mention the Clarence Hotel plans.

“I want to talk about (this) for one reason: the hope that maybe some of the ideas that we were talking about might have some resonance and might help you (the property conference) to influence the future work of Ireland,” he said.

Bow said that the firm was “inspired” by Paddy McKillen for the Clarence Hotel project.

“The idea of creating a central space in the (middle), of a building within a building, was inspired by the viking origins of the city,” he said.

“There were two sides to the building. On the Liffey side the idea was to keep the existing buildings. On Essex Street the whole thing would open up to contribute to the life of Temple Bar.

“It wasn’t to be, but for me it was one of the most inspirational things I’ve ever worked on.”