THE CENTRAL BANK of Ireland hopes a new outdoor artwork at its Dublin headquarters will create a “more social and transparent outlook” for the financial watchdog.

The regulator recently submitted an application with Dublin City Council to install an artwork by acclaimed Irish artist Eva Rothschild outside its North Wall Quay offices.

The multicoloured piece is entitled A Double Rainbow and is described in an architect’s design report as an “open and inviting” sculpture.

The Central Bank moved into its current base at North Wall Quay in 2017, leaving behind its former headquarters on Dame Street, which featured Éamonn O’Doherty’s sculpture Crann an Óir, or the Golden Tree.

The move to Dublin’s docklands cost a reported €140 million. The bank spent €130,000 on a light fitting by contemporary artist Niamh Barry for its reception area.

Eva Rothschild’s A Double Rainbow is expected to cost €320,000 in total, which includes the artist’s fee as well as design and build costs. 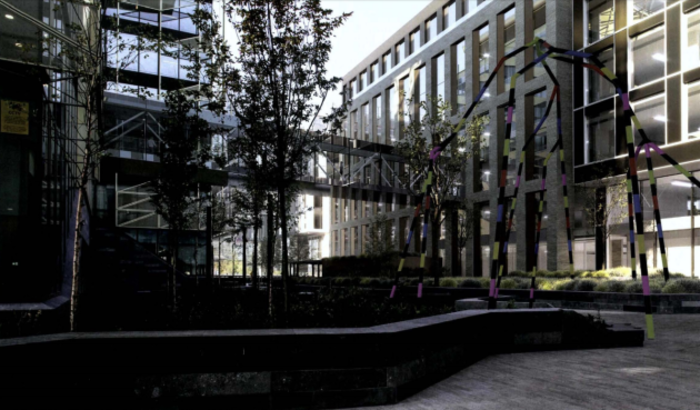 A planning report prepared on behalf of the Central Bank stated that it is intended for the artwork to become a “feature of the area, which would give a ‘visual lift’ to an otherwise relatively empty space”.

“In our view, the proposed public art would enhance the attractiveness and visual quality of the urban landscape at this specific location and would greatly add to the public domain,” the planning report stated.

A design study prepared by architecture firm Henry J Lyons explained that the sculpture takes the form of a multi-directional arch that is 10.5 metres tall and spans a distance of 14 metres.

“The title (A Double Rainbow) refers both to the colours which travel across its surfaces changing from each end to the next and, of course, to a natural phenomenon, the double rainbow and its apt association with good fortune and positive change,” it said.

“The sculpture is visible on approach from multiple perspectives, signposting a way to the plaza and creating an awareness of the bank as a new and active location within the city.” 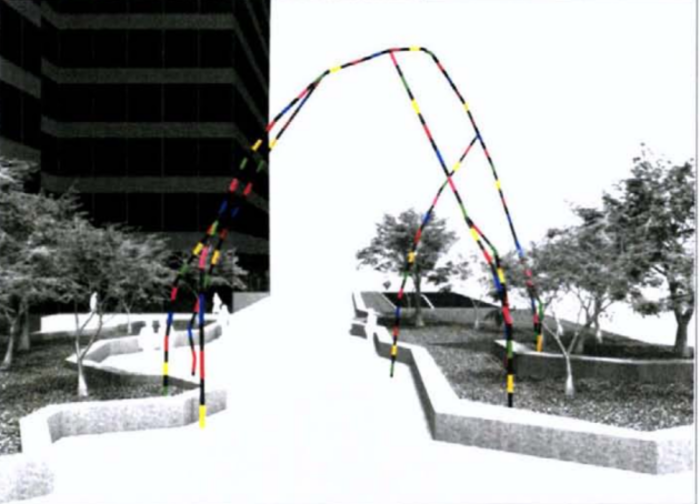 It is hoped the installation will create a sense of “ownership of the public space” for Dubliners.

“It should be a meeting place, a location in itself, a dynamic landmark artwork that we don’t just view from afar but becomes part of as we inhabit the space. We don’t just look, we are active within the sculpture.”

London-based Eva Rothschild has created installations similar to A Double Rainbow and is representing Ireland at the 2019 Venice Biennale art exhibition in Italy.

She been active since the early 2000s and her works have appeared in Tate Britain and New York’s Central Park.

Dublin council will later decide whether or not to give the installation of A Double Rainbow the green light.