The coffee store brand made its first move in the Irish market nearly four years ago when it announced plans to invest €20 million in Ireland and open 40 stores.

Accounts just published for the firm, which cover the 12-month period that ended 31 May 2017, showed Caffé Nero’s revenues shot up by more than €1.5 million on the previous year’s figure to €3.6 million.

The spike in revenue meant profits at the firm increased nearly fourfold, with the firm registering net income of €536,000 for the year.

According to the accounts, the company also increased its employee base by 50% during the financial year and to an average of 60 staff. Caffé Nero paid an average wage of around €18,000.

Since it first launched in Ireland, Caffé Nero has expanded its offering to a dozen stores across Dublin, Cork, Galway and Drogheda, but the expansion slowed last year as it opened no new stores.

Despite not expanding the business during the period, the directors noted that there are “strong growth prospects in the branded coffee bar market in Ireland” and Caffé Nero will open more Irish stores.

In recent weeks, the firm opened a new outlet on Dawson Street and last year applied for planning permission to open an outlet on the corner of George’s Street and Fade Street in part of David Marshall’s hair salon and training school. 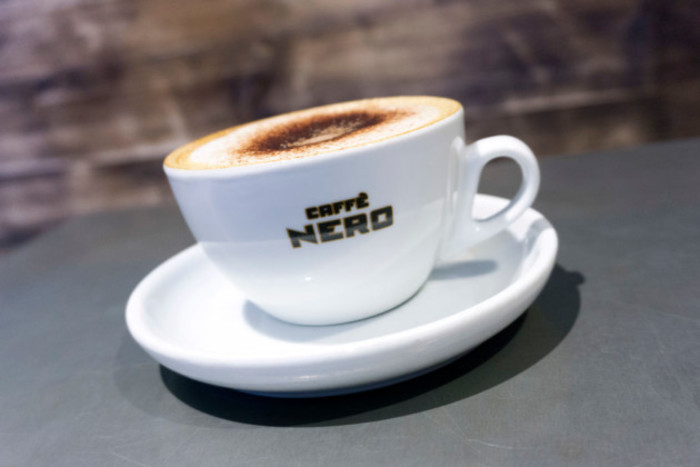 The Caffe Nero chain is part of the Rome Pikco Group, a holding company which oversees coffee brand’s operations in the UK, Turkey and other Middle Eastern states.

The firm was listed on London’s stock exchange at the turn of the century, however it returned to private ownership in 2007 following a management buyout.

In recent years, the chain founded by entrepreneur Gerry Ford in 1997 has been challenged by British media for consistently not paying corporation tax in Britain.

The most recent set of accounts for the UK operation show that since its main holding company made a loss of £24 million in 2017, it did not have to pay corporation tax. This is the 10th consecutive year the firm has not paid the tax bill.