The latest AIB-IHS Markit services purchasing managers’ index posted a reading of 54.6, down slightly on July’s figure of 55. Anything above 50 indicates that most businesses have reported growth.

AIB chief economist Oliver Mangan described August’s reading as “solid” and noted that Ireland’s index is above those for the eurozone (53.4) and US (50.9). However, he added that the level of growth is slower compared to previous years.

“It points to a slower pace of activity in the Irish economy in 2019,” Mangan said.

“Growth in new orders eased in the month, with some firms reporting a drop in UK orders owing to Brexit uncertainty. Furthermore, business confidence fell sharply to its lowest level since December 2011 as Brexit weighed on the outlook for activity in the sector.”

While employment in the services sector continued to grow at a steady pace, and was particularly strong with financial services firms, Mangan cautioned that “it was still the slowest rate of job creation seen since May 2013″.

Separately, figures released yesterday showed that the government recorded tax revenues of just over €35 billion by the end of August. That’s 0.7% – or €233 million - ahead of budget targets. Analysts at Davy stockbrokers said this will provide “some reassurance” to Finance Minister Paschal Donohoe. 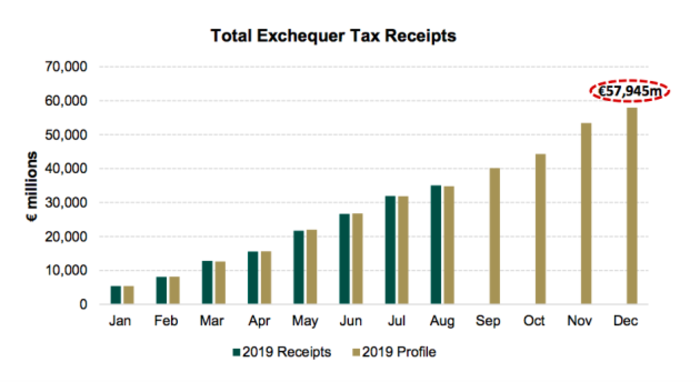 In a briefing note, Davy pundits noted that, as the UK parliament is in crisis over the fast-approaching Brexit endgame, the government is likely to decide next week whether to frame Budget 2020 around a disruptive no-deal scenario.

“If so, its strategy is still unclear, likely to be a mix of ‘balancing the books’ by deferring tax cuts and some spending but allowing a deficit to emerge and with targeted measures to help hard hit sectors, such as agri-food, manufacturing and tourism,” Davy told investors.